Ben Dooley appeared to have surprised even himself with his wonderful strike against Oldham Athletic, which proved the match-winning goal in the 1-0 triumph over Oldham Athletic. 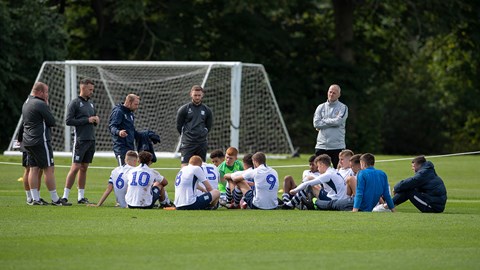 The midfielder struck a bouncing ball perfectly into the top left corner early in the first half and North End held on from there – despite having plenty of chances to extend their lead, especially in those opening 45 minutes – to seal all three points.

And the 16-year-old admitted that he didn’t know he had that ability to hit the sweet spot in such a fashion, particularly on his supposedly weaker left foot.

“It was great to get a goal and it was a good one as well to be fair – I didn’t think I had that in my locker!” Dooley told PNE.Com. “But the boys played well, we dug in, fought hard until the end and got the three points.

“It was with my weaker foot but I thought I had to go for it, it was perfectly set up for me and that’s two for me in the season now and hopefully I can get more goals.”

The youngster felt it was important to record a second consecutive win, having gone as many games without a victory in successive matches against Fleetwood Town recently, with triumphs over Rochdale and now Oldham having followed since then.

“It was a good performance in the first half from the boys,” he added. “Considering we had lost twice to Fleetwood, we needed to bounce back. It was good to do that against Rochdale and from the winning ways, we’ve carried on moving forward.

“We had a few chances, we just weren’t clinical enough so I think we need to work on that in training and make sure we become more clinical and score more goals.

“We had to work hard as a team to win. We got a bit shaky [in the second half], but we worked together as a team and made sure we saw it through.”

The youth team have now recorded seven wins from their opening ten matches of the campaign, with Dooley playing his part in both central midfield and at right back.

The first year scholar said he is happy to play his part wherever he is asked to do so and is now hoping to build on the back-to-back wins, with the young Lilywhites next facing Walsall with an 11am kick-off on Saturday 19th October at UCLan Sports Arena.

“I don’t mind helping and doing my duty for the team. It’s a team performance so if I need to be playing right back or wherever else I’m played, I’m happy to do that.

“We just need to work hard in training throughout the week and then go again next week.”