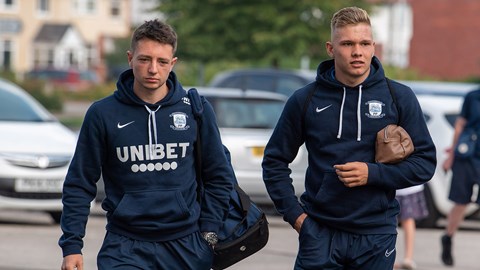 31 October 2019
The Preston-born 17-year-old came through the Academy at Deepdale and has agreed a two-and-a-half-year deal with the club, something he had always dreamed of.
“Signing a professional contract is a massive thing for me,” he told PNE.Com. “Growing up through football, it is all I wanted to do - it is hard to believe it has happened.
“Doing it with my hometown club makes it ten times better. Growing up at school, everyone supported North End, so to sign my first contract with the club is a dream come true – it is amazing.”
He is well aware, however, that he now drops straight back to the bottom of the ladder, but is boosted by the confidence that has been shown to him by the manager and the coaching staff.
“Training with the Academy and then going up to train with the first team every now and then and then dropping back down is hard work, but you just get on with it.
“As a job you are playing football, so you can’t get frustrated, I am just happy to have signed my contract and as long as I am playing football, I will be happy.

“To break the record at 16 showed how much the manager believes in me, so to have that is good to put into future games and to know the coaches are pleased with how I am doing and how I play, does give me confidence to do even better and to push to try and get into the first team more.

“It is not easy getting game time and getting your chance, but when you do, you just have to grasp it and do everything you can do to show you are comfortable playing at that level.
“It will take time, because the team are doing well and hopefully if I do start doing well in youth team football – when I am back playing and in the FA Youth Cup – that might push me to towards playing more games.”
At the moment the No.33 is out with an injury, but hoping to return soon, especially with the FA Youth Cup due to start soon, a big chance for Ethan and his team-mates to show what they are capable of.
“For now, I am just trying to get back to training again and hopefully pushing to play first team football.
“The FA Youth Cup could be three or four weeks away and I am just working as hard as I can in the gym on my recovery to make sure I am fit and well and ready for the FA Youth Cup games and hopefully it will allow me to show what I am about and what I can do,” he added.