Ben Dooley’s first half wonder strike proved a decisive one as the youth team edged out Oldham Athletic with a 1-0 victory at Chapel Road Training Ground.

The midfielder’s first-time effort on the half volley 17 minutes into the contest came amid a series of seemingly clearer opportunities for the young Lilywhites, making the job of seeing out the win a more difficult one, but it was a test they overcame nonetheless. 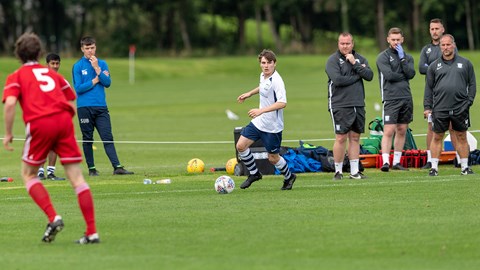 Dooley Surprises Himself With Splendid Strike

It was a second consecutive win and clean sheet for North End’s youngsters, with Oliver Lombard and Harry Huddart replacing Jimmy Corcoran and Ethan Walker in the side that beat Rochdale last weekend.

The visitors were dominant throughout the first half and Louis Potts’ wing play down the right caused the Latics problems in the early stages.

Potts beat his marker to reach the byline and find the first glimpse of goal, but his pullback for Jacob Holland-Wilkinson was cut out by the Latics defence.

The Lilywhites hadn’t yet fully hit their stride when the opening goal came just after the quarter of an hour mark.

Lewis Coulton’s cross from the left was met by Potts’ initial touch, followed by a second to prod it back again for Dooley standing just outside the area, whose sweetly struck volley on his weaker left foot arrowed into the top left corner.

North End only got better from there and there was a chance almost straight after the restart, as Potts again delivered from the right but Holland-Wilkinson couldn’t get his head to the ball.

Midway through the half, Joe Nolan picked up play and sprayed a ball over the defence for Aaron Bennett to take down on his chest, with his left-footed effort into the ground turned behind by Latics stopper Ellis Allen.

Tyrhys Dolan was inches away from doubling the lead when his quick turn 20 yards from goal bought him some space, with his dipping low strike rebounding off the inside of the post and away.

Immediately after, there was a rare first half chance at the other end as Zak Emmerson broke into the box but shot wide of the far-left corner.

Lewis Earl also stung Allen’s gloves before the break when he ran onto a loose ball some 30 yards out and fired for goal first time, with the Latics goalkeeper again palming wide.

Allen’s best work came in the final five minutes of the half, with Holland-Wilkinson going through on goal on three separate occasions but denied each time by the home ‘keeper.

The hosts came out a different side in the second half, in part thanks to the half-time introductions of Jack Williams and Junior Luamba, although their pressure didn’t immediately lead to chances on goal.

Oldham had to wait for 20 second half minutes for one of those, with Emmerson looking to have profited from a loose back pass as he was first denied by Lombard when through on goal, before Earl got back to block the second attempt almost on the line.

Bennett and Williams exchanged shots which each ‘keeper saw struck straight at them, with time still allowing more one for more clear chance for the home side.

It was in the 79th minute, when Williams crossed low to the back post where Emmerson was sliding in, but he couldn’t tuck inside the near post and instead converted wide.

North End defended resolutely thereafter to make it back-to-back victories and clean sheets and Academy manager Nick Harrison agreed that his side were beginning to rediscover the winning mentality which saw them start the campaign in such a rich vein of form.

“I think we have got that winning habit, but we’ve also got the ability to perform well, which is important, certainly for the development of these players,” he told the club website.

“I felt we played some really good football in the game and the first half was the best I’ve seen us for a long time.

“The players now need to keep building on that and believing in themselves by going into the next game with the objective of winning the game but performing well, too.”

Nick was impressed by his side’s showing at both ends of the pitch, despite the belief that more goals could’ve been scored in that dominant first half.

“The first half performance was outstanding and we should have been three or four nil up. Going in at half-time at 1-0 gives the opposition some belief and to be fair, they came at us.

“We actually had a couple of chances ourselves in the second half where we could have finished it off as well. I’m delighted that we’ve won the game, that’s important for the players, and I’m delighted we kept a clean sheet.

“It was an unbelievable strike from Ben to score the goal which wins us the game. We should have scored more in that first half, but that’s what it takes to win sometimes – a bit of quality.

“I felt they threw everything at it in the second half and I felt Oliver [Lombard], our young goalkeeper, made some great saves and came for crosses, and we won our headers from the corners or free-kicks that we gave away, so we showed great character.”