Preston North End midfielder Paul Gallagher is looking to this weekend’s game with Barnsley as a chance to strengthen a place in the top six.

3 October 2019
The Lilywhites go into the game seven unbeaten, having been in the Play-Off positions for a couple of weeks, and being on the cusp of the second international break, Gally wants the team to end this latest run of games with another home win.
Speaking to iFollow PNE ahead of the clash with Daniel Stendel’s Tykes, the PNE No.12 said: “We want to finish this batch of games in good style. If we can get a win, it would put us nicely in the table leading into the international break.

“We are playing really well at the minute, showing good grit and determination. We were disappointed to come away from Middlesbrough with a point, which shows how far we have come as a team, as a squad and as a club and if we can finish this batch of games off in a positive manner, it will be a good start to the season for us.”

3 October 2019
The visitors have had a tough run of games, but the experience North End man feels they are a dangerous team with the positives from last season’s promotion still evident.
“When you come up, you have that momentum of winning games, you have that belief; winning games breeds confidence and you can see that with Charlton, who are doing very well,” he continued.
“Barnsley have stood up and been counted for and put some points on the board. They are a young team and it will be difficult, they have no fear and it will be up to us to go out and put our stamp on the game, play the way we want play and do what we can do.

“This season we have cast an eye over the opposition, but I feel we have played our game. Going to places like Nottingham Forest and Birmingham we have stamped our authority on the game and played how we wanted to and come away with some good results doing that.

3 October 2019
“When the gaffer brings a game plan to us, we want to fulfil it. As soon as we cross the white line, we are in the zone, we are focused on the job at hand.
“We know teams’ strengths and weaknesses and what we can do to win the games. We have to go into a game with a mindset of how we want to play, with confidence and it is a good feeling at the minute.”
And with the rising of expectations, the former Leicester City man tempers those thoughts, but looks ahead positively to the rest of the campaign.

“This football club is a family club, I have always felt that since I have been here. The community is so important to the players as well as the fans. 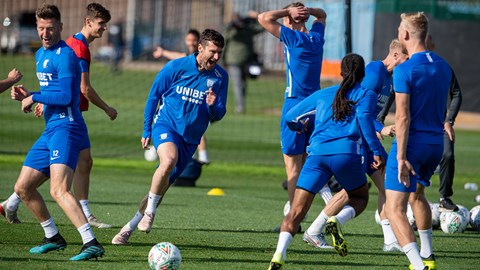 3 October 2019
“We don’t want to get carried away; you don’t win anything in September or the beginning of October – it is a marathon not a sprint – so we have to keep our feet on the ground, keep putting in performances every week and if we can do that and keep believing in the way we are playing, we will have a good opportunity.
“The lads are getting more experience, the discipline has been good this year and the injuries have settled down and I believe that if we keep a full squad together for the majority of the season, we will be there or thereabouts,” he added.