With results elsewhere going their way, the youth team sealed their place in the regional quarter-finals of the Youth Alliance Cup with a 3-0 against Rochdale.

Ethan Walker, Tyrhys Dolan and Joe Rodwell-Grant struck gold to make it two wins from two for the young Lilywhites in Youth Alliance Cup Group 5, following their away win to Bradford City by the same scoreline in August. 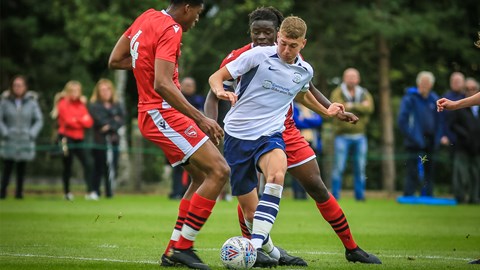 With Bradford and Notts County drawing in the other group game on the same day, none of North End's group opponents can now surpass or even match the six points which Nick Harrison's team have attained, even with the trip to County still on the cards later this month.

It was a welcome return to winning ways for PNE's youngsters, who hadn't played since losing 4-0 to Fleetwood Town a fortnight previously, and there were two changes to the starting line-up from that game as Tyler Williams and Harry Huddart made way for Lincoln McFayden and Aaron Bennett.

North End's breakthrough came in first half stoppage time when a flying run into the box from Lewis Coulton was unfairly halted by a Rochdale defender and the referee pointed to the penalty spot.

Ethan Walker stepped up and confidently dispatched his effort from 12 yards into the top right corner, recording his sixth goal of the campaign.

It was two barely ten minutes into the second half, after Ben Dooley's right wing cross was cleared into Joe Nolan's path, who in turn touched it forwards for Dolan on the half turn.

He let the ball run across him and unleashed a fine first time strike back across goal and into the bottom left corner, taking his own tally for the season to four.

Rodwell-Grant made sure of the win in the final minute of normal time, his goal coming straight from Jimmy Corcoran's clearance out from the back, that clearing the Rochdale backline for the PNE frontman to run onto and guide into the same bottom left corner with a controlled finish.

Next up for the young Lilywhites is a trip to league newcomers Oldham Athletic. The Latics had previously played in the North East section of the EFL Youth Alliance conference but have this season joined the North West section.

Academy boss Nick Harrison believes the test of facing Oldham at U18 level can prove a positive one for the team.

"It’s a long time since the U18s have played Oldham because they went into a different region," he said.

"All our age groups play against Oldham from U9s to U16s, so we have had experience of playing against them from over the season, but I think it will be good for our current group of U18s to play against a different team, so it’s going to be a different challenge again.

"Oldham always have good players so we will expect a tough game, but we just want the players to go onto the pitch, work hard and perform well, and I thought they did that really well against Rochdale. We’ll be making sure that the players are prepared throughout the week and then it’s up to them to go and perform again."