Tuesday night’s goalscorer and big fan of a derby day goal, Tom Barkhuizen, is the cover star and main interviewee of Saturday’s latest edition of the matchday programme.

24 October 2019
Like many of the current PNE players, Tom had to ply his trade at the lower levels of football before his switch to Deepdale.
And the frontman says this is what is helping North End challenge at the top end of the Championship table.
After starting his career at Blackpool, Tom spent time on loan at Hereford United in the 2011/12 season, before they were wound up in December 2014, then Fleetwood in 2012/13 before establishing himself at Morecambe and catching the eye of then PNE boss Simon Grayson and signing at Deepdale in January 2017.
PNE have built a reputation on taking players from lower leagues and developing them to perform on the bigger stage and it is paying off so far this season.
“I think you learn the game by playing in the lower leagues,” said Tom, 26, who signed a new three-year-deal in the summer.
“I went out on loan at 18 to Hereford which helped me develop a lot. You see so many players stay in U23 teams and then they become 23 and they don’t really know the game.

“If you go on loan and are playing games at an early age, it benefits you in the long run, you learn about the game and what it means and I think it’s done that for me.”

24 October 2019
Tom, who has played on the wing and up front for PNE, says it is his best season to date personally in terms of performances although not the highest position he has been at in the Championship.
“One year when I was at Blackpool, we were top of the Championship for the first seven games, but then we nearly got relegated so it’s not a good season to compare!
“But so far, it’s been a good season individually and collectively. On a personal level I am playing at a decent level so I hope we can keep it going.
“I have started the majority of games this season, I have played a lot over the last three years and it’s nice to know the manager still thinks I can do a good job.
“I don’t mind being on the wing or up front. I enjoy playing up front, I think I have said that since I have played there a few times, but I am happy on the wing as it’s where I have played mostly over the last few years. As long as I am in the team I don’t really care.”
Last season wasn’t a good start for the Lilywhites, who were in the relegation places at one stage, and then it was always catch-up.
This year PNE are in a good position to challenge – and that’s where Tom is determined to help them stay.
“I think last year we brought in quite a few wingers and the gaffer mixed it up because we didn’t start very well.

“The difference this year is we have started well, the team has changed quite a lot, and thankfully I have managed to stay in for most of the games. 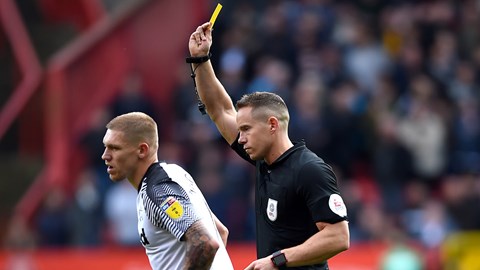 24 October 2019
“Around the place it’s a good place to be, but the key is to not get too high and not start looking too far ahead. We are taking it game by game and we have to stay grounded wherever we are in the league.
“It’s my third year here, I am starting to feel like a veteran, there are a few of the old faces still here, but it’s nice. I enjoy it and I signed my new contract in the summer so I am here for another few years which is good.”
There’s a lot more from Tom in Saturday’s ten edition of the season of The One And Only, including interviews and features with Ben Pearson, Louis Moult, Tommy Spurr, Ian Bryson, Ryan Ledson and much, much more.
This is another packed full 84-pages, on sale from Friday afternoon from the Sir Tom Finney Stand ticket office, or from inside and outside the stadium on matchday, still for just £3 per copy.