After being kept frustrated in the opening 45 minutes, Nolan’s spectacular long range strike four minutes into the second half opened the floodgates, as Aaron Bennett added a brace while Louis Potts, Tyrhys Dolan and Jacob Holland-Wilkinson also hit one each. 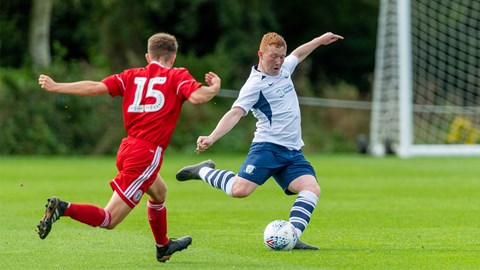 With Jimmy Corcoran away on international duty, first year goalkeeper Oliver Lombard was handed his first competitive start for the youth team, while Hafizul Rahman was included from the get-go for the first time in two years following a lengthy injury lay-off.

Despite those incomings representing the only two changes from last week’s win over Blackpool, the visitors had the better of the early opportunities.

Guelor Kasongo volleyed into his own hand early on before setting up Luke Stowe for a first time drive that Lombard saved.

In fact almost half an hour had gone before PNE tested ‘keeper Liam Sherwood, the Stanley stopper getting down well to keep out Ethan Walker’s 20-yard left-footed drive.

At the other end, Gabe Ellis’ close range effort was blocked and Jack Mackinley miskicked a chance on the half volley, ten minutes before half-time.

The hosts ramped up the pressure in the remaining minutes of the first half but not could find an opener, the best chances falling to Potts, who had a shot cleared off the line before volleying over from Walker’s cross.

They continued to dominate possession after the interval though and went head courtesy of Nolan’s sumptuous effort on 49 minutes.

After the ball had been headed away from the Stanley box, Nolan brought the ball down on his chest and unleashed a rocket of an effort into the top left corner from all of 25 yards.

It would prove to be a scoring spree of a second half for PNE but Lombard had to make a crucial save before that could ensue.

Stanley sub Charlie Ridge might have scored with his first touch when a free-kick pinballed around the box and eventually to his feet, with Lombard making himself big to prevent the equaliser.

Only moments later, North End doubled their lead. Nolan’s slid in to regain possession and play Potts through, whose powerful effort nestled inside the near post with the help of a slight deflection.

The game opened up from there and Bennett made it three after 62 minutes, curling home cleverly from the edge of the area, before Dolan stole in for the fourth, converting the rebound after substitute Joe Rodwell-Grant had his shot saved from the angle.

Sherwood did brilliantly to keep out fellow substitute Jacob Holland-Wilkinson moments later, shooting from point blank distance after a great one-two with Rodwell-Grant.

But it was merely a case of prolonging the inevitable and the fifth did come when Bennett beat Sherwood to the ball on the counter, the ‘keeper having rushed off his line and ventured far up the pitch, allowing the PNE man to roll into an empty net from range.

And the rout was completed in the 90th minute when Bennett’s pinpoint delivery from a corner was met by a header back across goal and into the right-hand corner of the net from Holland-Wilkinson.

Nick Harrison said it was a case of remaining patient in front of his goal for his team to make their breakthrough in the second half, the score having remained level at the break.

“We had to be patient, Accrington came with a game plan and made it really difficult for us in the first half in terms of dropping deep and getting men behind the ball,” he told the club website. “I thought we were patient even in the first half and had a lot of possession, albeit without really hurting them.

“The only message we really had at half-time was that we needed to be keep being patient, keep moving the ball but to try to be braver in terms of our movement and when we were on the ball to get on the half turn and not let get them set in their shape. I thought that’s exactly what we did in the second half.

“We had a lot of possession so we were probably never going to concede many chances, but I thought the lads at the back had to keep their concentration because they were always a threat on the counter attack and they did that really well.”

Nick added that it was as a result of that increased bravery in the final third that led to Joe Nolan’s impressive deadlock-breaker.

And Nolan’s midfield partner Aaron Bennett also had his display praised by the Academy manager.

“I thought it was a great finish from Joe, he hit it perfectly. It all came because we got nearer to their goal and we were a little bit braver on the ball, which allowed Joe to play a bit higher up. It’s just a great finish and a great goal.

“I thought he [Aaron Bennett] was very good, he got on the ball and made things happen. For a young lad who’s still an U16 to do that in an U18 fixture I think is credit to him.

“He’s getting a lot of game time, which he deserves and that’s the best challenge for him and hopefully he continues improving as a player.”