Preston North End manager Alex Neil said his side would have a chance to show what they were capable of against Premier League champions Manchester City at Deepdale on Tuesday night.

23 September 2019
The Lilywhites come face to face with the side who hold all the four domestic trophies at present and he acknowledges just how tough a challenge it is for the squad.
“It is going to be a tough game,” he told iFollow PNE. “We understand how good Manchester City are. We have watched quite a few of their games and we have analysed them and broken them down.
“In terms of rotations and patterns it is nothing we have not seen before, however, it is the quality of player and the speed in which they do it that makes it difficult to stop.
“It is going to be a real tough game, everybody is aware of them, but it is a good game for us – there is no pressure on us.

“We want to try and go and enjoy it, make a good account of ourselves and see where that takes us.”

23 September 2019
Playing any Premier League side is tough, but the North End boss believes Tuesday’s opponents and Liverpool are on a ‘different level’ to everyone else right now.
“In my opinion, City and Liverpool are on a different level right now,” continued the gaffer.
“If you look at both teams, and the results that they get – even on Sunday when Chelsea were better and on top of Liverpool, they still found a way to win.
“What tends to happen is that when one of these teams does drop points – like City at Norwich – then you get a fierce reaction after that and unfortunately for Watford, they bore the brunt of that. That’s what they are capable of doing and it was eight going on 15.

“I have watched the game back and their quality in final third areas is incredible at times. We know what we are coming up against, but it is just another game and we have to see what we can go and do.” 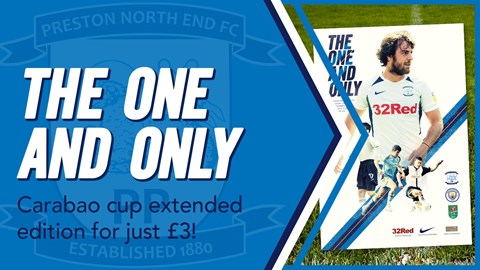 23 September 2019
Deepdale is closing in on a sell-out, with just a couple of hundred seats left in the Sir Tom Finney Stand for the game and the manager is delighted to see it full and hoping it encourages a few more to come down and see his third-placed Championship side in their push at the top of the league.
“We want to try and get as many fans through the gate as we can.
“I don’t like preaching and telling people they should be coming, it is their own choice as to whether they come or not.
“What we have a duty to do, is to try and play as we can week in, week out; try and be as successful as we can and I think that will certainly attract fans.
“It is no surprise that when Manchester City come to town, with the quality they have got, people come to watch them, because the attraction that they are, but hopefully if it does tempt more fans to come back to watch us after this game, that would certainly be beneficial for us,” he added.