David Nugent is looking to build up his fitness and have more opportunities to play in front of a packed Deepdale crowd after making his home bow for North End for a second time. 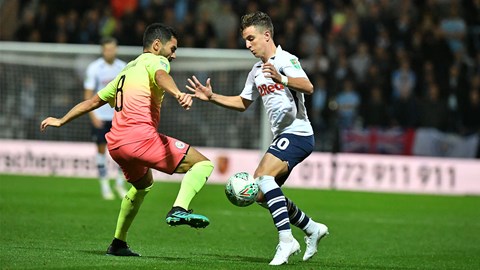 The forward came off the bench with just under half an hour to go as the Lilywhites exited the Carabao Cup at the third round stage at the hands of Manchester City, losing the game 3-0 but giving a decent account of themselves in the process.

And speaking to iFollow PNE post-match, Nugent spoke of the moment he came off the bench to a rapturous applause from the North End faithful, as well as the team testing themselves against the holders of all four domestic trophies.

“It was an unbelievable reception when I came on, I was getting shivers down my spine when I walked onto the pitch again, but I really enjoyed it,” the striker told the club’s media channel.

“The result wasn’t the one we wanted but when you’re playing the champions of England, it’s never going to be an easy day. I think the lads gave a good account of themselves and we can be proud of our performance.

“We did put it in a great effort in the first 20 minutes, but when they have so much possession, it does tire you out and you tend to lose concentration.

The 34-year-old has a vast amount of Premier League experience himself but admitted City and close rivals Liverpool are reaching new heights with the standard they are currently setting in England’s top flight.

“Those two [City and Liverpool] last season ran away with the league. This season as well they’re the top two again, you can see everyone trying to catch them up but it’s impossible at the moment, they’re both going to run away with it.

“They’ve set a standard for the other clubs to try to match them but we give it a go. You look at Watford last week getting beat 8-0, we can take a lot of credit from that with conceding three, we can move forward and on Saturday hopefully we can get a positive result against Bristol.”

And the striker says the experience of going up against such high-quality opposition, in front of a 22,000-strong crowd at Deepdale, can help the Lilywhites on their quest to facing teams of that level on a more regular basis by challenging for promotion from the Championship.

“I’m sure if we keep on winning games and playing like we have in the league, I’m sure the fans will come out in numbers and get behind us.

“We’ve all got the same goal here, we all want to get in the Premier League and we played a Premier League side today and gave a good account of ourselves.

“To do that, we have to perform well on Saturday in the Championship – Saturday, Tuesday, Saturday, Tuesday – keep going, get that consistency going and hopefully we can stay up there in the league and be where we want to be.”

Watch more from Nuge on iFollow PNE now by clicking the video above.