Aaron Bennett hailed the patience of the youth team after they scored all of their goals in the second half of the 6-0 victory over Accrington Stanley. 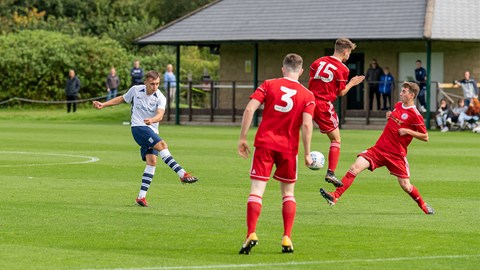 The young Lilywhites had dominated the ball in the first half but without threatening opposition goalkeeper Liam Sherwood too much right until the final moments before the break.

But U16 midfielder Bennett, who scored two and set up another after the interval, said there was no major change in emphasis from North End approaching the closing 45 minutes.

“It was a good performance and I thought all the squad did well,” the Wales youth international told PNE.Com. “We worked hard and we punished them when we could.

“We couldn’t get through them as much [in the first half], they were quite tight and they hit us quite a few times on the counter attack but I think we dealt with that well.

“We just got told to continue doing what we were doing in terms of moving the ball and we knew that chances would start to come. When they did, we took them.”

The youngster said team-mate Joe Nolan’s long range goal to break the deadlock provided a confidence boost, with Bennett himself going on to score his two goals from outside the box as well.

“It [the first goal] just gave us a bit of confidence going forwards. We knew we had the ability but just needed to create the opportunities.

“I just thought I might as well have a shot [for PNE’s third goal] and see what happens and luckily the ‘keeper was rooted to the spot and it went in .

“I think it’s a big step up with playing up [an age group]. I just want to impress and maybe get a few more goals as I continue.”

Having broken into the side as an U15 last season, Bennett is hoping he will continue to receive opportunities in the youth team midfield as the season progresses, after playing a key part in the opening weeks of the campaign.

“I thought with last season where I was a lot younger than everybody else, I did reasonably well. But still being younger and getting to start these games is a good experience and I just hope there’s more to come.

“I just want to get more starts and I’d like to maybe appear in the FA Youth Cup and just keep going.”