We have never met Manchester City in the League Cup competition since its inception in 1960, however, this will be the 94th time the two teams have met in competitive action.

23 September 2019
North End will be looking to narrow the gap on the head to head, with City leading with 42 wins to PNE's 33 in the 93 games played in the league and FA Cup to far.
City's first visit to Deepdale was also in a cup competition, in the FA Cup, way back in January 1897, with the Lilywhites running out 6-0 winners, whilst their last visit was in the same competition in February 2007, when a certain David Nugent gave PNE the lead, only for Michael Ball to level and a late Matt Hill goal and an injury-time strike from Stephen Ireland give the visitors a narrow win.
However, the blue side of Manchester's last league visit ended with North End the victors as the ITV Digital Cameras turned up and saw one of the best goals of the last 25 years win the match for a man who would become a City player later.
It was former Manchester United youth star Jon Macken who won it, scoring an amazing 45-yard goal to demolish Manchester City at Deepdale.

The striker picked up the ball in the centre circle and unleashed a rocket that City goalkeeper Nicky Weaver could only watch fly into the top corner of the net. 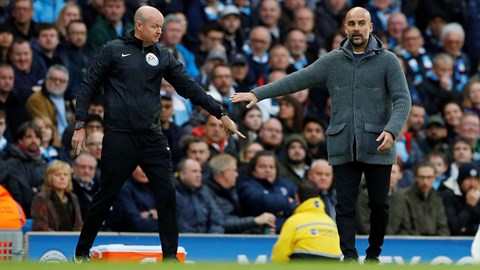 23 September 2019
City had appeared to be in the driving seat, thanks to a first half goal from Darren Huckerby, but they were shocked by a North End revival just after the interval.
Huckerby's one-touch skills earned City a goal in the 37th minute. Danny Tiatto provided a defence-splitting pass and Huckerby took his chance well, firing into the right corner of the net.
Kevin Keegan's side could have been one up five minutes earlier. Danny Granville's long drilled shot seemed to get a touch from Huckerby on the way into the net, but the flag was instantly raised with Huckerby ruled offside.
Ali Benarbia tested PNE keeper Teuvo Moilanen - making his 150th appearance - with a powerful tenth-minute free-kick, but the Finnish star coped with the danger.
For North End, David Healy, another former United star, and Macken combined to pose a 23rd-minute threat. Macken got a bad first touch to the pass, but managed an about-turn and lobbed a shot wide of the far post.
In another exchange, Paul McKenna set up Mark Rankine who squeezed through the defence, only to power a header wide. But Healy grabbed only his second goal of the season five minutes after the restart.
Graham Alexander managed to slip past the defence before crossing from the right flank where Healy was well placed to send in a sliding shot.
In the dying minutes Eyal Berkovic was sent off for foul and abusive language after City's claims of a penalty went unheeded following a challenge on Huckerby, Mike Dean brandishing the red card for the City man.