Preston North End’s Irish international midfielder Alan Browne admits that the current situation is a unique one, but he is determined to use it to learn from. 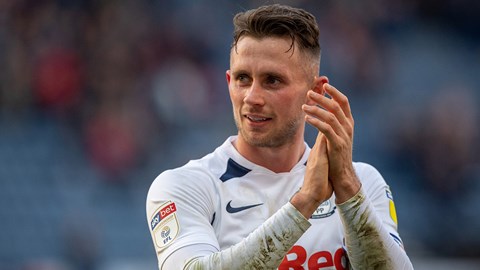 27 March 2020
The 24-year-old, who made his debut last week six years ago, spoke to PNE.Com from his home and said that becoming a father recently, had meant his priorities during this difficult period were now different to what they may have been a couple of years ago.
“It is a bizarre experience,” said the No.8 when he spoke to the official website. “It is the same for everyone. People never thought they’d come across something like this in their lifetime, I certainly didn’t.
“No one was prepared for it and it has come as a big shock to people, but the sooner we react as a whole to it, the sooner we can get back outside and get back to our normal lives.
“If you have kids and you are close to family, it makes you think a bit more about what you are doing. If I was on my own, just living in a house, I don’t think I would be worried at all, I would just get on with it, but having people close to me now, it does make you that bit more wary.

“It is a strange situation and it is just a fear of the unknown – not knowing what this virus is, how dangerous it can be and the fact we haven’t got a cure for it.

“I think most people are in the same boat, but especially people with kids will be wanting their health to be their priority, rather than their own.”
The 2018 PNE player of the year says the break, whilst unwanted, came at a time when he has been able to refresh, although it is difficult not having a date for resumption.
“It is good to learn from,” he continued. “I probably could have done with a break. I have not had a break from football in a while now, so it is good, especially having a baby now.
“Just to be home in the morning with him more and getting to spend more time with the family are things that don't I get to do. Often I might come home from training and be too tired to do things and whilst we are not going out, I am just able to be at home and be creative – finding things to do, playing games, it is a good learning experience and a great way to spend time with the family.

“In this moment, you just have to make the most of a bad situation and a lot of people are trying to do that.

“There a minority of people not taking it as serious as they should, but with the government laying down some rules, hopefully everybody realises just how serious it is now.
“It is a tough one [not knowing when football will resume]. At the moment there are a lot more things to be worrying out than football, but having said that, it is still my job and we will have to go back at some stage.
“We don’t know when that is and it is tough, because you don’t know how much work to actually do. When we first finished up, I said I would have a week off and then get back to it, but I actually find myself doing something every day – whether that is out of boredom or that I need to keep ticking over, but it is just a good way to pass some time.
“I have a few bits of equipment now and it is a nice set up to keep on top of things and it is an important period when we do go back.
“We don’t know what is going to happen yet and that is the tough part, not knowing when we will resume.

“There are a lot more important things than football right now, but as a professional you always have to expect the unexpected and be ready when the end date comes.”

Another thing that the squad have been doing, is regularly talking and Alan says this is vital, for everyone, everywhere, especially for people who live on their own.
“It is really important we all stay in touch. If I was on my own, I would get lonely, but I would probably manage.
“It is such a scary time that if you were living on your own there is only so much you can do to pass the time before you need some human contact. You need to be talking to people as often as you can and not being able to do that will be different for everyone, but I expect some people could fall into depression or anxiety, but as a squad we have to keep in contact with each other as much as we can, especially for the boys who aren’t with their family and are maybe living on their own.
“It is especially important for them, because they are at more risk of feeling lonely than anyone else,” he added.
Click on the link on the left hand side to read Alan's praise of the NHS during the battle against the Coronavirus pandemic.