As announced earlier this week, Preston North End are backing the Boot The Virus campaign with over one hundred professional footballers across 25 clubs already on board to donate a pair of boots to help raise funds for NHS Charities!

North End captain Tom Clarke helped to kick-off the campaign which was launched by lifelong North End fan Kenny Marland and his partner Joanne, who travel home and away supporting the Lilywhites.

Kenny wanted to volunteer to help the NHS but is unable to do so as he is currently undergoing chemotherapy treatment in his fourth battle against cancer, so he and his partner came up with an alternative way to help support the NHS and the fantastic work that they do.

"Throughout April we are contacting clubs and footballers throughout all four leagues in English football and asking them to donate a pair of signed boots. We have the website set up and then on 1st May, the boots of the players who have agreed to donate a pair will be on the website and then the auction will run through until the 25th May which is when the Championship Play-Off final should have been, which would have been the last domestic game of the season.

"From then, we will arrange to collect the boots from training grounds once the government allows the players to return to training and it is safe to do so, then every penny that we receive through the auction will go to the NHS.

"I am really fortunate that my treatment is still ongoing, the NHS, no matter how much money I raise, I will never repay them for keeping me alive so it's something that I think works well for everyone involved. I get to raise money for the NHS, the NHS benefit from the funds and the fans can also own a piece of sporting memorabilia from their hero or a favourite player so it's something positive in what is a negative situation at the moment."

The campaign is asking for professional footballers across all leagues to donate a pair of signed matchday boots which will then be auctioned online throughout May, with all funds raised going directly to NHS Charities. 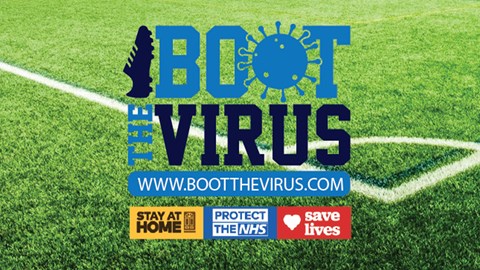 The auction is set to go live at the start of May, and supporters will be able to get their hands on a fantastic piece of sporting memorabilia while also helping to raise funds for the fantastic work of NHS Charities.

All donated items must be confirmed by the end of April, so we are encouraging as many players and clubs as possible to get involved within the next two weeks.

The word has already been spread far and wide, with skipper Tom Clarke sharing his support on Sky Sports News, while Kenny himself was live on Sky News on Saturday.

As mentioned, all funds raised will go to NHS Charities Together, if you want to make a donation directly before the auction goes live, you can do so by clicking here.

If you’re a professional footballer, retired professional or you work for a club and want to make a donation, please get in contact via the links below to back the initiative and help fund the NHS as they battle to 'Boot the Virus'.