Gentry Day may have had to be celebrated without a fixture in 2020, but manager Alex Neil believes it is an event that is about much mire than football.

Speaking to PNE.Com on the day Gentry Day should have been celebrated at the Lilyhwites’ trip to face Brentford in what would have been our final trip to Griffin Park, the manager admitted he knew little about the celebration before he arrived, but has certainly embraced it since.
“The history of the club, for the hardcore fans especially, they like to go back and dwell on it,” he said. “They like talking about things like Sir Tom Finney, the traditions of the club in general and the Invincibles.
“It is no surprise that the club is known as ‘Proud Preston’. There is definitely - from all the different clubs I have been at through my time as a player and a manager – a real inner pride, certainly for the fans in things like Gentry Day.

“To have a particular day to remember people who have been PNE fans and family who have passed on, really is quite deep and meaningful.

“If you take anything into account and you attach that kind of raw emotion to it, thinking about your own family as part of a special day is one of the things I was most surprised I knew nothing about considering how much raw feeling is attached to it.” 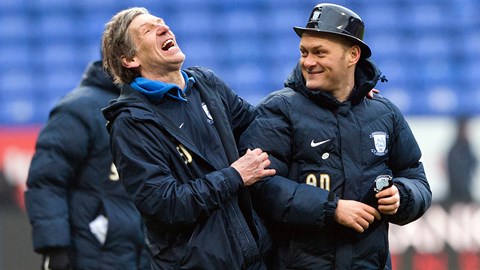 18 April 2020
The gaffer also had fantastic memories of his first Gentry Day experience, at Bolton Wanderers in March 2018.
“Gentry Day for me was strange, because I don’t really remember discussing it in advance. Leading into the Bolton game [Gentry Day 2018], I am sure it would have been brought up in an interview, but I don’t remember discussing it at all.
“So, when we turned up at Bolton and we had sold out that whole stand and I saw all the bowler hats, it was certainly a new experience for me.
“The way the game went, we were in good form at the time, we had a good record against Bolton as well, but they scored to go ahead 1-0 and from that point onwards we were considerably the better team.
“I remember Tommy B having a good chance and the ’keeper saving it, they went ahead from a corner, but even when we conceded, I had a real belief we were going to go on and win the game.
“It was one of those experiences you have. We changed the game after about 60 minutes when we brought Josh Harrop and Sean Maguire on and both of them had a real impact on the game; Sean scored twice and Josh was involved in a couple of the goals.

“But my outstanding memory from the game was going down to the stand with all the fans and I actually think there is a picture of me and Steve Cowell [the kitman], when I had my bowler hat on and that was when I really realised how big Gentry Day was and that year they picked an unbelievable day for it, with it being a derby and the way we won the game.

“That is the outstanding memory I have to Gentry Day so far.”
There is much more from the North End manager in the interview available, by clicking on the video at the top of the page, including him talking about speaking to a number of over 70-year-old supporters as part of the club’s Gentry Day activities and about what he has learnt from the lockdown experience, make sure you check it out.