Preston North End won the third division title on this date in 1996, with a 2-0 win at Hartlepool United’s Victoria Ground. 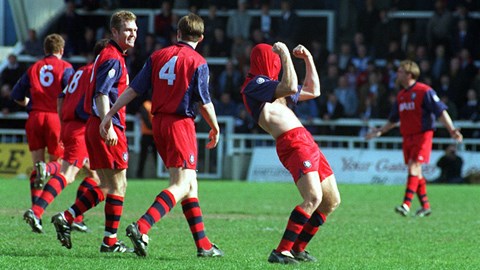 27 April 2020
The scorer of one of the goals that day was Welsh midfielder Simon Davey, who spoke to PNE.Com from his Atlanta home about his memories of what he described as a ‘fantastic season’.
The now 49-year-old, who scored 22 goals in 122 appearances for the Lilywhites, felt the squad had all the attributes of a successful team: “They are great memories,” he told the official website.
“That was a fantastic season. I have spoken to people before about ‘what are successful teams?’ and within the group we had trust; in every position we had players who could play multiple positions; we had a fluid group of midfield players who could fill in each other’s roles and that is rare.
“We had an understanding amongst the group that we could rotate and pop up in different areas and it was successful. We had a good group of players and that was one of the best seasons I had as a player.

“My goals return was one of my highest and I ended up in the PFA team of the year with multiple players in that group. We romped the league, up there for long periods of time.”

The win at Hartlepool sealed the title, having won promotion at Orient the week prior and Simon recalled how it was a different time in terms of the exposure of the team and also the fact a future global superstar was in London to celebrate promotion with them.
“I remember the Hartlepool game, I scored and it was a great day,” he continued.
“I recall many instances where you would have conflict in the dressing room, people almost and sometimes coming to blows on the training ground, because of the competitiveness, but there was a trust in there.
“When I became a manager, the biggest change was the advent of social media and that goldfish bowl that you then lived in.
“In those days we could say what we liked and we could call each other out for the better of the team and the better of the result without any fear of there being any repercussions. It was a great group of players – it was a squad and there were great characters within it.
“I remember going down to Orient and it was red hot, it was the biggest pitch in the country at the time and you can imagine the fatigue levels, but also the adrenaline levels, because it was a case of ‘if we win this game, we’re promoted!’.
“It was a fantastic occasion, I remember everyone’s shirts were coming off, I remember climbing into the stands, I remember the supporters running onto the field.

“David Beckham came that day as well, because he had been part of it the previous year and he had kept in touch with a lot of the coaching staff and the players, and him and his family joined us in the player’s bar afterwards, which was a great gesture from him. You could see how grounded he was.

“My family had driven across from Wales to watch the game. We convincingly won most of our games that year; we had a belief that we could win anywhere. We could go behind and we still had the tools that anyone in any position could score a goal and if you look at the stats, we scored all over the pitch. It was a good all-round team and a squad effort.
“There was no conflict and no one blaming each other; we backed each other up, we supported each other, we socialised together and we believed in each other and we believed that wherever we went we could win.
“We had the belief that every team had to worry about us and always felt we were the better the team and we didn’t worry about the opposition, we just take care of business.”
And the celebrations afterwards were something he still recalls with a huge fondness, especially as it coincided with another important moment in his life: “You can’t replicate that. We had the open topped bus.
“My twins had just been born, so we won the league, we were at the flag market and I had two new babies and you can’t replicate that anywhere.

“The amount of people who came out was phenomenal. It was the first time I had won anything where I had been involved on a regular basis.

“The amount of support at the games was brilliant. It was the time when the stadium was being updated and there was an air that the club was going places, it was on the up and improving, the fans loved the team, it was the focal part of the city and to be locked out of Deepdale at the Exeter game, times have changed!” He added.