Alex Neil highlighted his side’s positive build-up play and control of proceedings from their trip to Prenton Park, but admitted that the Lilywhites needed to convert more of their chances, as Tranmere Rovers equalised late on to force a 1-1 draw.

Tom Barkhuizen had fired North End ahead just after the half hour mark, latching onto Brad Potts’ through ball and converting under goalkeeper Joe Murphy, but Stefan Payne levelled matters just two minutes from time. 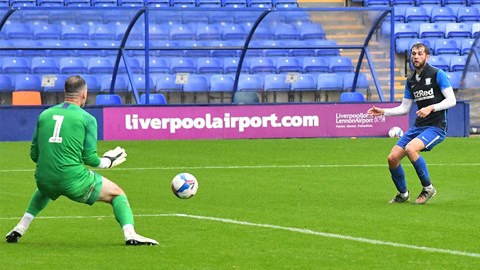 The manager conceded there was a “tinge of disappointment” about the result, but suggested the game might have been decided earlier on had his team put away some of their earlier opportunities, under the pouring rain in the Wirral.

“[The conditions are] the same for both teams, it’s tough to move the ball in the conditions,” he told iFollow PNE. “I think probably the biggest thing we found tough was trying to switch the play and I thought the longer passing became more difficult because of the distance.

“The fact that the pitch was so saturated and your boots tend to expand and your feet don’t stick in your boot as well when you’re trying to hit that longer pass. But I thought we moved the ball well, to be honest I thought the game should have been out of sight really; we had two or three really good opportunities in the first half.

“We get a goal, they sort of have a little bit of play, we nick it, we break and we damage them. When you don’t take some of the opportunities that come your way and the game wears on and obviously the opposition has got nothing to lose at that point. We made an error and it’s a bad back pass and they nick it and get a goal.

“That’s disappointing and frustrating because we wanted to win the game but I think in terms of our control of the match, our build-up play was good, I think the concern was the fact that we didn’t convert more chances.”

The manager noted the threat of Tom Barkhuizen, who opened the scoring against Michael Jackson’s outfit, and also spoke of some of the opportunities his team might have taken advantage of to have extended that lead.

“Tom carries a threat for us with his pace in behind and he held his width really well in the game and he’s got to be disciplined to do that because there’s a tendency to want to go and drift and get involved in the match.

“I thought we moved the ball, certainly in the first half, very well, created a lot of opportunities and even second half I thought Seani [Maguire] had a couple of good chances, I think Scotty gets in for one as well down the side and we had good opportunities to get crosses in. Maybe the quality wasn’t quite there.

“There’s obviously a tinge of frustration and a bit of disappointment with the result.”

With the side that played the half an hour at Salford City on Saturday having played the first hour in this, 22 players have now gained 90 minutes over the last two games.

The manager likened the situation to building up match sharpness, rather than fitness, following the shortened break, and revealed he is soon expecting to have more options to call upon.

“We’ve only had three weeks off so it’s not as if we’ve been off for long, it’s just getting match sharpness into the squad and then obviously hoping we’re ready for next Saturday and we want to go and win that game.

“Louis  [Moult] has been longer term, but Declan [Rudd] and Darnell [Fisher] in particular just picked up nothing significant, but certainly enough to be out for ten days, fourteen days potentially. Unfortunately for them they have missed these games but we hope to get them back involved in terms of the games coming up.”

Looking ahead to the Carabao Cup tie against Mansfield Town this weekend the gaffer is looking forward to a contest that will have an extra edge to it as a competitive game.

“It’s not a game with no consequences. If you look at most friendlies, obviously you always want to win, but there’s no consequences at the end of it – you don’t drop points or you don’t get knocked out of the cup – whereas next week has got consequences.

“We want to make sure we’re in the next round of the cup and we want to put a good performance in, we want to play well – we’ve got three really tough games after that as well for Premier League opposition and that should set us up well for the start of the season.”

Watch more from Alex below or on iFollow PNE via the official PNE App.