Josh Harrop has enjoyed getting back on the pitch in pre-season with North End and fhas felt the benefit of their opening two friendlies of the 2020/21 campaign, with his current focus on building sharpness and fitness ahead of the return of competitive action.

The Lilywhites’ latest friendly saw a 1-1 draw against Tranmere Rovers at Prenton Park, with Stefan Payne cancelling out Tom Barkhuizen’s opener as the PNE XI that completed the final 30 minutes against Salford City got an hour under their belts in the Wirral, and vice versa.

North End’s No.10 was among those involved from the start against Michael Jackson’s team, who he felt provided a good test amid the Storm Francis downpour, adding that that is exactly what the players need as they build towards competitive action.

“It was a good test, you want a good test when you play in pre-season,” Harrop told iFollow PNE post-match. “It’s good to get minutes in the legs and get the sharpness back.

“It was windy, it was wet. But it’s more about the minutes and getting your movements back on the pitch and getting back used to playing.

After a shortened summer break, following the delayed end to last season because of the Coronavirus pandemic, Harrop is confident that the reduced three-week break will help he and his team-mates to quickly rediscover their match sharpness.

“I think it will probably help us fitness wise. We didn’t really lose much, three weeks isn’t too long, so your body has time to recover but you’ve not actually lost too much fitness. It’s good for us and you can see the lads in training, everyone is looking sharp.

“The games we’ve played have been competitive and they’ve been good games. The tempo has been good in both of them and that’s what you want, you want to test yourself, you want to have a good game and it’s been enjoyable.”

The midfielder is feeling confident in his own game, but did concede that he perhaps should have scored with one of his final touches before departing the pitch as part of wholesale changes on the hour mark. 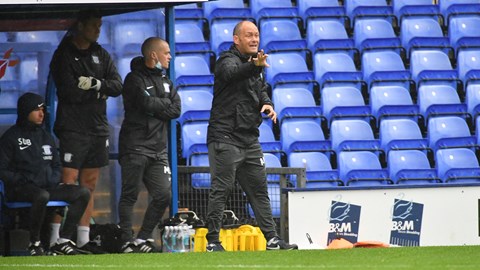 “I want to create chances, I had a few balls which I slid through, I got a few shots off and stuff. Obviously, I want to be scoring goals, but you can’t score in every game. I want to be creating and making chances for the players in front of me.

“I probably should have [scored], I’ve just glanced it and it’s gone over my foot a bit. But that will come with sharpness.”

North End play competitively for the first time in the 2020/21 campaign on Saturday with Mansfield Town the opponents in the Carabao Cup First Round at Deepdale on Saturday.

Having faced League Two sides in Tranmere and Salford for the opening two friendlies, Harrop is assured it will be another test awaiting the Lilywhites at the weekend.

“It’s come around quickly considering we’ve only had a 60 minutes and a 30 minutes, going straight into a real game. It’s good though because you want to get back playing as fast as possible and it will be good, it will be a good test for us.”

Watch more Josh by clicking on the video below.