Preston North End face Mansfield Town in Saturday’s first round of the Carabao Cup, the same competition they last met in, back in 2004.

It was Billy Davies who had just taken charge of the Lilywhites, whilst current boss Alex Neil lined up in midfield for Keith Curle’s Stags, but it was the Field Mill visitors who came away victorious, despite ending the season with ten men.

The game was pretty much over as a contest inside the opening ten minutes. American left-winger Eddie Lewis sent over a corner from the left just two minutes in, at the Quarry Lane end and Richard Cresswell rose yards above the Stags defence to plant a header past Kevin Pilkington in the home goal.

Five minutes later, Artell tried to dribble a ball out of defence, and played a loose pass to Curtis, who committed a foul and was lucky not to be booked. From the free-kick, the ball was gently rolled to one side before a shot was struck, but the wall encroached.

Referee Phil Prosser marched the ball forward ten yards and now the free-kick was right on the edge of the box. Graham Alexander strode forward and planted a fine shot into the bottom right hand corner, Pilkington given no chance.

A third came just after the half hour mark and it came from Jamaican winger Omar Daley on debut. Daley beat Baptiste and then left him for pace, before sliding a shot past Pilkington and just inside the left post. 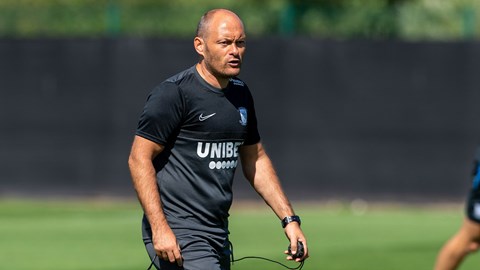 With the tie pretty much over, the second half was not played with the same intensity or tempo, but Simon Lynch made it four with six minutes left. Lewis broke down the left, brushing aside Dimech and pulled a cross back from the byline for the substitute to side-foot powerfully past Pilkington from eight yards.

Both goalmaker and goalscorer appeared to celebrate with fans in the North Stand. Referee Prosser waited for the players to leave their fans, and proceeded to book Lewis, who had already been booked, and hence show him a harsh red card, but it did not affect the result as PNE progressed to the next round.