Ryan Ledson says he is enjoying the battle for places in Preston North End’s competitive midfield after signing an extension to his contract at Deepdale. 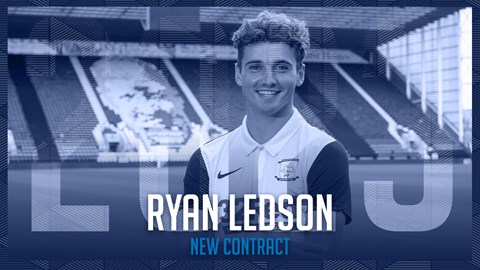 The 23-year-old, who celebrated his birthday yesterday, said that the experience and quality in Alex Neil’s squad was something he was hoping would continue to allow him to develop.

“I have said many times before, we have an unbelievable midfield, one of the best in the Championship,” the No.18 told iFollow PNE after putting pen to paper on a new contract that will extend his stay until at least the summer of 2023.

“I go into training every day and learn from the likes of Gally, Pearo, DJ, Browney; all top quality players in the Championship. For the likes of me and [Tom] Bayliss, the young lads coming through, it is good to learn from them.

“Every time I get on the pitch I just try and show what I can do and just try and affect the game as much as I can. I enjoyed playing towards the end of last season, playing in the team regularly and hopefully that can carry on.”

The decision to agree a new deal was something the Liverpudlian says was not a difficult one: “It was an easy decision for me. It is a club I want to be at. It is a club I moved to two years ago, it is close to home, it is the perfect club for me and I am looking forward to kicking on here,” he continued.

“I have loved my time here so far. The staff have been brilliant with me; we have an unbelievable changing room and the fans follow us home and away and I am extremely happy and am made up to get it signed.

“Off the field I will be more relaxed. I now have three years left on my deal and it is all about concentrating on the football.

“I will be doing everything I can to be playing in the first game. We have all come back, the lads have looked well and sharp and we are looking forward to getting the pre-season games under our belt.

“I feel as if this week has been tough, but we need to get the difficult running into our legs and then the games start and come thick and fast in pre-season.”

The weekend sees the Lilywhites get their 2020/21 preparations underway with their first pre-season game, as they take on Graham Alexander’s Salford City, which means Ryan and his team-mates will have an early reunion with former club captain Tom Clarke.

Which is something the former Everton man is relishing: “We know how much ‘Skip’ means to us here, he was an unbelievable character in our changing room and I am made up that he got his move [to Salford], I think it is a great move for him and all the lads can’t wait to see him.

“I have seen Salford have had a couple of games and Skip has said that they look well and with their manager, who was here, he will have them fit and it will be a good test for us and is one we will look forward to.

“We all dread the first week, but once that is out of the way, you can look forward to the games and get your match fitness under your belt.”