Preston North End manager Alex Neil takes his side to a club he played for when the Lilywhites travel to Oakwell on Tuesday night.

Preston North End manager Alex Neil takes his side to a club he played for when the Lilywhites travel to Oakwell on Tuesday night.

The PNE boss spent four years at the Reds, making almost 150 appearances between 2000 and 2004, but will be looking to get a positive result for his current club when they make the trip across the Pennines.

Speaking to iFollow PNE ahead of the game, the gaffer is expecting a different Barnsley to the one his side faced in 2019/20, under this season’s new manager Valérien Ismaël.

“They have changed in the way that they have played,” said Alex. “Last year in the Championship certainly helped them. It acclimatised a lot of the players to the rigours of the Championship and what it requires.

“They recruited some players and strengthened their squad over the summer and the new manager has come in and given them something to think about.

“Last year we had two good results against Barnsley, but that counts for nothing. If anything, they will be more determined this time to put one over on us.

“Oakwell is always a difficult place to go. I have watched a good few of their games and they are a hard team to beat; it will be a real testing match for us.

“For any team you need a balance of youth and experience and there has been talk about how young Barnsley are, but they have a lot of young players who have a lot of football under their belt, like Conor Chaplin and Cauley Woodrow, so I don’t think they are lacking experience.”

Like PNE, the Tykes have had some excellent results and also some inconsistency, but have won their last two against Wycombe Wanderers and Sheffield Wednesday and the manager says that unpredictability of results in the division is a bi-product of the unique environment in which the season is being played.

“That’s the nature of the league this year because of the way it has been formatted,” he continued. “You don’t give players time to recover, you don’t give teams time to prep and to be on it, fully, game in, game out, is extremely difficult.

“That has been found across the league. You look at Barnsley, they beat Watford 1-0 and then got beat 4-0 by Bournemouth. I think the variance of results is the most we have ever seen and the most I have ever experienced in my time.

“I can’t remember being on such a high and then such a low in such a condensed period of time.

“I have been well documented as saying since the start of the season how difficult it has been for the players – and I don’t just mean our players, I mean the players across the board. We have seen a massive influx of injuries.

“You look at Pat’s injury, that has happened to [Dominic] Iorfa at Sheffield Wednesday and [Scott] Wharton at Blackburn and these are not common injuries. What it shows is that the players are being flogged to death and that is the problem at the moment.” 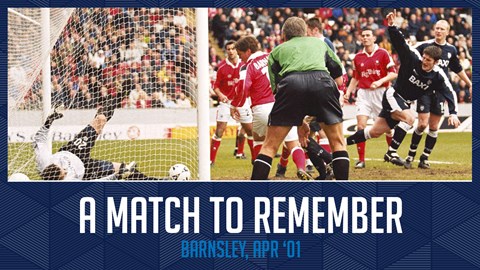 The other inconsistency is the whether the game is being played in front of a crowd or not. Saturday’s trip to Kenilworth Road saw North End and their hosts play in front of 2,000 fans, but at Oakwell on Tuesday – and then at home to Bristol City on Friday night – they will be back to playing behind closed doors.

And this is something that Alex feels can affect the games: “I felt it did have an impact on the game [on Saturday]. Up until the opening goal we were coming into the match, after a poor start, but the goal and the way their fans lifted the team after that, had a negative effect on us, because it is not something we have been used to for nine months.

“Unfortunately for us, we didn’t really recover after that. A goal like that is going to energise you at a stadium like Luton, because it is condensed and the fans feel like they are right on top of you.

“The 2,000 feels like 10,000 and I though the stadium felt like it was full and that helped them along the way. It doesn’t give us any excuses as to how poor we were, but I think it explains the intensity we had up until the goal and why it dissipated after.

“We have no time to dwell on it though. We have got big games coming up, we have limited time to rest and we have to utilise that time as best we can. Over the last 24 hours I am sure the players will have reflected on the weekend, but equally, they will have put it to the back of their minds, because they know they have another job we need to get done coming up,” he added.

Former North End forward Brett Ormerod will be in our commentary box on Tuesday night, joining Guy Clarke to bring full coverage of the Lilywhites’ trip to Oakwell on iFollow PNE – click here now to sign up for a match pass for just £10.