Centre back Joe Blanchard was ‘made up’ to earn the youth side’s first clean sheet since the second game of the season.

Blanchard has been a key figure in the PNE backline that has been searching for a first shutout since September’s 6-0 derby victory over Blackpool.

The U18s found what they’ve been looking for in Saturday’s 3-0 win against Walsall in the North West Youth Alliance league. 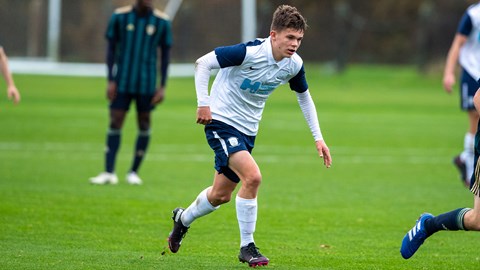 Speaking to PNE.com, the 17-year-old said: “I was made-up [to get the clean sheet]. I was happy with how we defended – we didn’t really give them much of a chance throughout the game to score any goals.

“I thought we were solid at the back. I was happy with the defence and the ‘keeper, who made some good saves as well, which helped us with the clean sheet.”

Goals from Joe Rodwell-Grant and Lewis Leigh (two) secured the three points for North End against the visitors’ ten men, who had their goalkeeper sent off just before half-time.

First year scholar Blanchard was positive about the team’s performance, but having played a full half with a man advantage, he admits there were improvements to be made.

“We performed well in large chunks of the game, but I do feel like we can still work on consistency throughout the game,” he said.

“When we go against ten men, we need to keep the pressure on, not get carried away with ourselves and start playing sloppy passes or trying to do too much ourselves.

“I think we did that a bit, which allowed them to apply more pressure towards the end.

“We’ve got to take it to teams more than we did and keep the high level of performance throughout the game, for as long as we can, to give ourselves a bigger chance of scoring more goals, which I think we should’ve done today.”

Blanchard was joined in the heart of the defence by a new centre-back partner in Harry Huddart, who has been playing predominantly in midfield this season but deputised for the injured Harry Nevin.

On their partnership, Blanchard said: “I’ve played with Harry [Huddart] for a while, so we obviously know what each other are about.

“We communicate well and I thought we defended well as a pair. I’m probably going to be playing with him a bit more now, so it’s just key that we start playing together in training and games and getting to know each other more, about where we’re playing and what we need to do.”