Determination To Dig In For Win Pleases Alex

Alex Neil acknowledged his Preston North End side’s display was ‘mixed’ at Pride Park, but his overriding emotion was one of satisfaction as the Lilywhites left it late to beat Derby County on Boxing Day.

Alex Neil acknowledged his Preston North End side’s display was ‘mixed’ at Pride Park, but his overriding emotion was one of satisfaction as the Lilywhites left it late to beat Derby County on Boxing Day.

Alan Browne scored a dramatic, beautifully struck winner deep into added time, with that the only goal of the game and enough to secure North End a first league win against the Rams in almost two decades.

Speaking to iFollow PNE after the game, the boss said while his side could have been more creative against the ten-man Rams – who lost Martyn Waghorn through a 20th-minute dismissal – he was, overall, pleased to see his players pick up the three points. 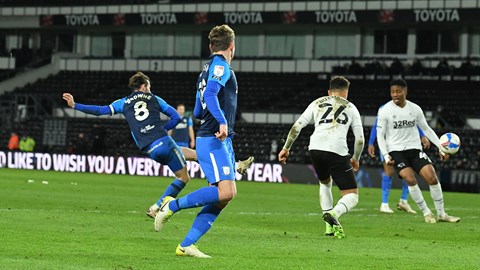 “It’s a little bit mixed,” Alex said, describing his thoughts on the performance. “First half when they went down to ten men, I thought we played well till half-time.

“Second half, they changed it and they sort of stopped us switching the play in the middle of the pitch by going a 4-3-2 and making it difficult for us. I didn’t think we moved the ball quick enough and to be honest didn’t really probe and cause as many problems as we would have liked against ten men.

“Credit to the lads, they dug in, their main responsibility is go and try to win the match – they did that, so I’m probably just being really grumpy for no reason! Alan produced a moment of quality and it won us the match and obviously we’re delighted with that.”

Alex also confessed that he had some self-inflicted frustration after the game.

“I think part of it’s probably annoying me is the fact I changed it quite a lot second half to try to find a way to be affective and I’m sort of half blaming myself for how less affective we were in the second half and that’s probably one of my frustrations,” he said.

“We’ve played really well in certain matches and maybe not got what we’ve deserved and it’s a results-based business. When you’re the coach, what you want to do is you want to assess the performance. When I’m sitting in the house tonight, I’ll be reflecting on a good three points and pleased with the lads’ determination and how they dug in.

“Can we play better? Yeah, we can, we know we can, particularly second half. But we’re not going to play well every week and win so today I think it was good that we played okay at best and we managed to win the game.”

And in securing the win, North End made it back-to-back wins in the Championship for only the second time in the 2020/21 campaign.

“Six points out of six is pleasing, I think it’s the first time we’ve won here in I don’t know how long. [There are] a lot of positives.

“The nicest thing is maybe when you aren’t firing on all cylinders is to go and pick up the three points. Really pleased for the lads, I think we’ve dug in and now we’ve given ourselves a good buffer and start looking up the table now, it’s pleasing.”