Preston North End Academy winger Jacob Holland-Wilkinson has had the taste of men’s football this season, in his loan spells and in the Lilywhites’ first team squad but his focus for this week is on the U18s' FA Youth Cup clash with Lincoln City.

Preston North End Academy winger Jacob Holland-Wilkinson has had the taste of men’s football this season, in his loan spells and in the Lilywhites’ first team squad. 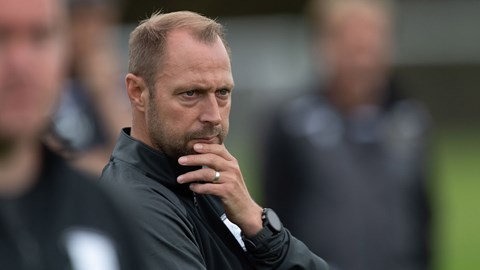 Nick Harrison: “A Great Game To Finish The Year”

However, the 18-year-old is back with his U18 team-mates on Tuesday night as the young North Enders enter the FA Youth Cup with a third round trip to face Lincoln City at the LNER Stadium.

Jacob, who has had work experience spells with both Kendal Town and Lancaster City, believes these experiences have helped develop his game and he is looking forward to using that as Nick Harrison’s men take the trip east to face the Imps.

“All the lads and the coaches are excited,” he told iFollow PNE. “It is something we have been looking forward to. It got cancelled last time and that was something we were all disappointed about, but it is now time to kick-on and we are all buzzing for it.

“I have learnt a lot from training with the first team; that demand they put on you to be a better player and going on loan has helped me a lot, understanding that men’s side of the game.

“Some of the lads who have been up training with the first team have then taken those demands when they have dropped back down and they ask the same from the younger lads as well.

“When you are playing out on loan, you are playing with men who are trying to make a living out of it and you can see what three points means to them and I think Joe [Rodwell-Grant] and myself have brought that competitive edge back with us into the team.”

The biggest disappointment for Jacob and his team-mates is the fact that the game will not be played in front of any fans, however, the incentive of a home time later in January 2021 – against Watford at Deepdale – is something that is certainly providing plenty of motivation.

“All the lads were looking forward to having people watching, as in previous years, but it is what it is, we can’t change it and we are all motivated anyway and we’ll all be ready to go and try and get through to the next round.

“We will go into the game confident. Our last performance [3-0 win over Walsall] has given us that confidence boost and we would like to have played again at the weekend, to give us that momentum, but that was postponed, but we are all confident and ready to go.

“Everyone wants to get through and get that home tie, especially with the chance fans might be able to be allowed in. We need to focus on tomorrow night first, but if we can win, that is something we can all look forward to.”

Each week’s youth alliance games are important for the Academy squad, but the performance more than result is the key, however, when it comes to the FA Youth Cup, only winning is on the agenda, and that is a message that rings loud and clear in the U18 dressing room.

“When you think about a league game, you know what to expect, week in, week out, but when it comes to these FA Youth Cup games, you play against teams that you don’t face all the time and this is something you have to consider.

“These are bigger occasions. You are playing in a stadium, which feels better and you play on better pitches and everyone is ready to go.

“All the lads know it is the result we need to be thinking about. We need to get the win, because if we do, we can then play at home and a game against Watford would be something to look forward to,” added the PNE No.27.

We will have a live stream of the game on PNE.Com and the club’s YouTube channel on Tuesday night from just before kick-off. It will be a video stream only, with no commentary, but check the website from just before 7pm to watch the young PNE side in action.