Preston North End full back Joe Rafferty has admitted that his demeanour from Tuesday to Tuesday this week was in stark contrast.

Having seen red in the home defeat to Blackburn Rovers, he told iFollow PNE that it was a tough one to take, but was delighted to be part of an excellent team display in the impressive win over Bournemouth at the Vitality Stadium on his return to the side.

“I was devastated about the Blackburn game,” he said. “I just wanted to go out and put in as good a performance as I could and the main thing was to go get the win.

“It was a tough game going to Bournemouth away, but we thought we could go there and win and we performed really well and got the win.

“We went out there and didn’t think about recent disappointments, played as well as we can and we were lucky enough to get the win.

“Now, everyone comes in with a smile on their face after a win, because everyone is happy and now we have to come in, recover well and get ready for Saturday.” 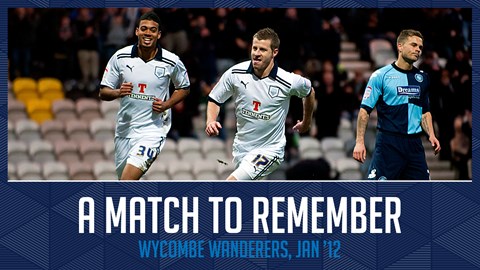 The next test sees the arrival of Wycombe Wanderers to Deepdale and the former Rochdale defender thinks their manager’s PNE connections will give him an added motivation.

“Wycombe are a decent team,” he continued. “I have watched them a few times on the TV. They are going to be a tough team; they will get in our faces and they will be tough to break down.

“It is another game we will have to get ourselves up for and try and go out and win again.

“Coming up from League One, you have to have a solid foundation and make yourself tough to beat and they have been in games. They have a brilliant manager, in Gareth Ainsworth and we just have to go out there and do our best against them.

“I imagine Gareth will have his players up for this. It is always a good feeling going to a team you played for and I guess he will have a bit of extra motivation to come here and try and win, but hopefully we can go our and play the way we did on Tuesday night.

“The plan is to try and go out and replicate your last good performance and hopefully get the win, but it is hard to do. If we knew how to do it every single week, we would, but it doesn’t work like that.

“If we can play anywhere near as well as we did the other night then we will have a good chance of winning the game.”

The Chairboys faced Stoke City on Wednesday night in front of 1,000 fans at Adams Park and Raff says that this is a good thing and something the Lilywhites squad are looking forward to happening in PR1.

“It is something to look forward to. We can’t wait to have the fans back in; it will give us a massive boost going into those games.

“It feels like we are turning a corner in the world and you can see a bit of light at the end of tunnel now.

“Hopefully in the next few weeks we will have the fans back in and it will be a real boost for us,” he added.