Sean Maguire felt the entire Preston North End side put in a brilliant performance to defeat AFC Bournemouth at the Vitality Stadium, adding that it was one of his best individual displays in some time.

Sean Maguire felt the entire Preston North End side put in a brilliant performance to defeat AFC Bournemouth at the Vitality Stadium, adding that it was one of his best individual displays in some time.

The Republic of Ireland international led the line admirably as the Lilywhites surged into a three-goal lead courtesy of goals from Tom Barkhuizen, Scott Sinclair – for which Seani supplied the assist – and Patrick Bauer, those enough to negate the hosts’ late replies from Junior Stanislas and Sam Surridge. 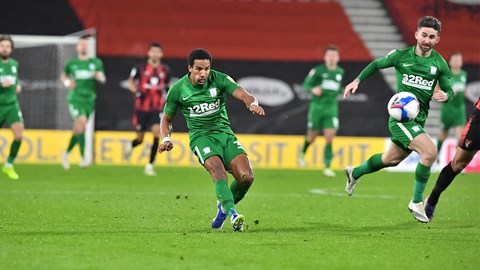 Speaking to iFollow PNE after the game, Seani revealed that North End planned to frustrate the Cherries and pleased to see the execution of that blueprint come to fruition with such devastating success.

“We had a game plan to come out tonight to frustrate them,” said the 26-year-old. “I think it could have been easy for us – we’re frustrated with the last two games – to come here and park the bus.

“I thought if one team was going to win it we were going to win it and it showed going up 3-0. I thought first half we were magnificent and then we followed that through in the first 25-30 minutes in the second half. We settled the storm the last 15 minutes or so but it was a brilliant performance from everyone.

“It was a different type of game he wanted to play, that false No.9 dropping into pockets and I thought me and DJ linked really well; DJ grabbed two assists.

“I suppose if I’m not there to header the goal [for the assist], I don’t think Scotty scores that 50-yarder or so! It was a brilliant goal by Scotty, that’s what he has in the locker. I was delighted for him and he was brilliant again tonight.” 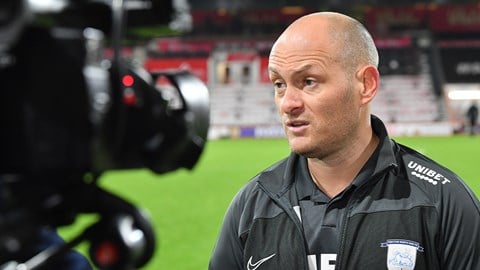 The defeat was soured by the injury suffered by the final Lilywhites goalscorer on the night, Patrick Bauer, who it has now been confirmed will miss the rest of the season, but Maguire stressed that the German will have the full backing of his team-mates, and remains confident he can come back stronger.

“He was unbelievable tonight against a player that’s in form and in the second half they went two up front and got his goal as well.

“Every single one of us are going to behind him and it will probably be a long road to recovery but I’ve no doubts he’ll come back a better person and a better player.”

Maguire had plenty of praise for the other goalscorers on the night; Tom Barkhuizen hitting his third in four matches, Scott Sinclair notching his sixth of the campaign – all of which have come on the Lilywhites’ travels, and also Daniel Johnson who registered two assists.

“That [Barkhuizen’s first] was a typical us goal really. They had a corner, pressing us high, we nicked it and in three or four passes it was in the back of the net.

“People probably think that’s an easy chance or an easy goal to put away but I think Barks has made it look easy, the ball was bobbling and DJ had to put it in pace and he’s finished it brilliantly.

“He’s scored three in four now so it’s great to see him confidence high and Scotty notch one and DJ I thought was unplayable tonight at times. The balls he was putting in, I really enjoyed playing with him, and it was a really enjoyable game.”

The forward is now looking forward to welcoming Wycombe Wanderers to Deepdale at the weekend – among whom will be former Lilywhite and Seani’s international team-mate, Daryl Horgan.

“It’s a game where we need to stamp our authority and bring our confidence into the game from tonight and into Saturday.

“It’s going to be a difficult game, they’re a dark horse this year and they’ve picked up a couple of good wins, but if we can beat Bournemouth away I’m sure we can go into any game hoping we can win.”

Watch more from Seani by clicking on the video above.