Paul Huntington: “It Is A Pleasure To Come To Work”

Preston North End centre half Paul Huntington was ‘delighted’ to extend his stay with the Lilywhites for a tenth season.

Preston North End centre half Paul Huntington was ‘delighted’ to extend his stay with the Lilywhites for a tenth season. 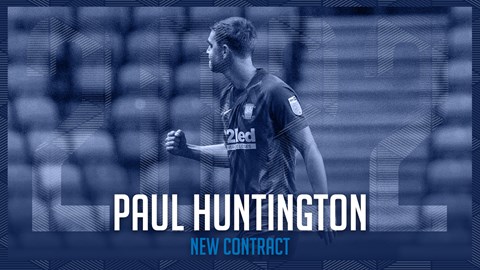 The No.23 will complete a decade at Deepdale when his new contract comes to an end in the summer of 2022, after he put pen to paper on a new deal.

And, as he closes in on becoming the 26th player in the club’s history to make 300 appearances for the club, he told iFollow PNE he was still enjoying every day with the club.

“You have to be adaptable as a footballer, taking on board what different managers want and different ways of playing, as well as learning.

“I am very aware that you are never too old to keep learning and I really enjoy taking information on board and putting that into action.

“We have a good group who can take on messages and apply the game plans that the manager is looking for us to achieve.

“It is a pleasure to come into work every day, it is one big family – we are all on the same page, there are no big egos and the team spirit is a big part of what we do here and it has been a very good eight-and-a-half-years, but I am not dwelling on that, I am just looking at the present and hopefully there are many more good times to come.”

His recent run in the team, with back-to-back wins and clean sheets either side of Christmas is something the 33-year-old has enjoyed, playing his 250th league game for the club at Pride Park on Boxing Day and he hopes that with more games it can improve further.

“I have spoken before about getting the consistency of a settled team and it has been hard with injuries and suspensions to do that – just as a number of other teams have experienced,” he continued.

“It has been good the last few games and we are looking to continue that.

“Most of the players now have been together for a while now and every training session and every game you play together, those relationships get stronger.

“I have really enjoyed playing alongside Ben [Davies] again and hopefully that can flourish and show on the pitch.”

Hunts is now seven games short of that 300-appearance mark, but he says that he is not looking any further than the next game, with plenty of time now to achieve the milestone.

“It is not really something in the forefront of my mind. The games have come thick and fast and Christmas and New Year is always a busy time for us as players and the club in general.

“It has been a case of rest, recover and prepare for the next game.

“But for me on a personal level I can’t look too far forward, the next game is the most important thing and that’s what we are now building towards and we will make sure that we are ready,” he added.

You can watch that game against Mark Robins’ Sky Blues by signing up for an iFollow match pass, with Jonathan Breeze and Graham Alexander delivering the full commentary from approximately 7.15pm on Tuesday night – click here now to sign up for your access.