Preston North End manager Alex Neil believes that Saturday’s clash with Grant McCann’s Hull City at Deepdale will be a tough game for his side.

20 February 2020
Neil says that despite the sales of key men Jarrod Bowen and Kamil Grosicki in January, McCann’s Tigers side will still possess plenty of attacking threats.
He told iFollow PNE: “I think it’s been a tough period recently for them, but to be honest, I think you would’ve expected that having lost those players.
“Marcus [Maddison] scored a good goal against Swansea, I watched that game, and he will be a threat. He drifts in off the side, I think they started him as a No.10 in one of the games I’ve seen and put him wide. He’s got that maverick quality where he can pop up with a goal or a pass out of nothing that can hurt you.

“We’ve got to be aware of their strengths and make sure we try and defend them as well as we can.”

20 February 2020
The Tigers have tended to operate with a lone striker so far this season, with Tom Eaves and Josh Magennis sharing the workload up front.
And Neil says that dealing with the threats they pose will be an important step towards a positive result.
He explained: “They’re focal points, they can put the ball up to them and they’ll try and keep it alive and try and flick on and take it in. Both of them are mobile in terms of that they can stretch you.
“It’s just one of the ones where the lads are going to have defend well and try and win those individual battles, and if they can come out on top hopefully it allows us to go forward rather than having to go back towards our own goal.”
North End sit in sixth place with 13 games of the season remaining, and Alex wants his side to start another positive run, starting with this weekend’s clash.
“This league’s so challenging, I think if you look at the form of each team, even the top teams, everybody’s had a spell which has been difficult for them,” he continued.

“We’ve come off the back of a really good spell, lost the last game to a set play and we need to make sure we go on a good run. 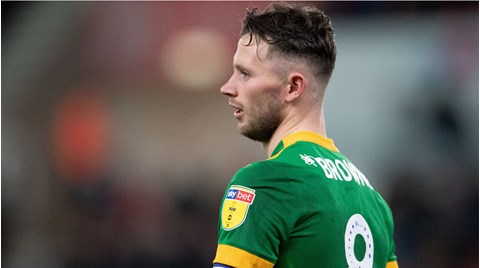 20 February 2020
“I think these last 13 games are going to be crucial for every team that’s got aspirations of having a good end to the season and obviously trying to challenge for the promotion spots and get into the play offs if we can.
“We know this is a really important game for us, and we need to obviously do our utmost to try and win it.”
In terms of team news for Saturday, the gaffer could welcome back Darnell Fisher to the fold after he missed the defeat to Millwall last week due to a hamstring problem.
Long-term absentee Louis Moult is back outside on grass as he steps up his recovery from an ACL operation in September, but Alex confirmed that Tom Bayliss is likely to be out for the rest of the season after undergoing an ankle operation.
“We played him in a closed doors game just to get him ready to be honest. I was planning on potentially starting him that Saturday [against Charlton] and he showed real signs of the progress we’d hoped he’d be making.
“He played against Norwich the week before as well and he showed up well, so he was getting to the stage where I felt as if he was ready to start to get himself involved.
“It’s really, really frustrating for him and really disappointing, but he’ll come back stronger I’m sure – once we get a pre-season under his belt he’ll be ready to go next year,” he added.
Watch the full pre-match interview with the gaffer on iFollow PNE by clicking on the video above.