Alex Neil was pleased with the improvement his side showed in the second half of their 1-1 draw against Swansea City at Deepdale. 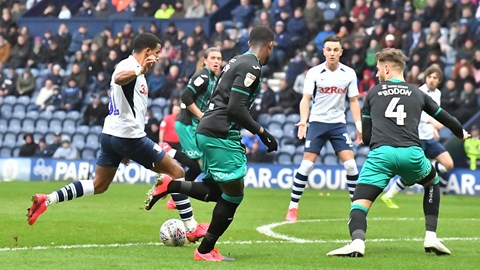 Conversely, the Lilywhites’ goal did come in the opening 45 minutes – Scott Sinclair netting his first for the club in some style – but the gaffer saw a more pro-active approach from his team in the second half.

The manager admitted he would have taken a point at the break but having seen the Lilywhites up their game following the half-time restart, he felt they might have gone on to take all three points.

“I think certainly at half-time I’d have probably taken a point,” he told iFollow PNE post-match.

“First half I didn’t think we were particularly good, I thought that the wind certainly didn’t help us, I thought we didn’t risk the ball enough, we weren’t brave enough in possession, I thought we turned the ball too quickly and we found it difficult to get a foothold in the game first half.

“I thought the one bit of quality we did have was from Scott, he scores a great goal, but other than that I thought we showed little flashes in the first half but not enough.

“At half-time we addressed a few things, spoke about being braver on the ball second half, being more physical and winning more individual duels and I thought we did all that second half – second half was a good performance.

“I thought we had probably two or three really good chances to potentially win the game. First half, I didn’t think we did ourselves justice at all, second half I thought was much improved.”

Alex was impressed by the impact of Scott Sinclair to score his first goal for the club, curling a fine left-footed finish into the bottom corner from distance inside half an hour, before Rhian Brewster equalised five minutes later for the away side.

“To be honest, it’s a tough one because Scott, Tommy B and Josh [Harrop] didn’t deserve to come out of the team and to be honest I’ve tried to shoehorn them in and get them into areas where I thought they’d be affective.

“It didn’t work first half and Scott gave us that bit of quality. Strangely, when I changed it and I brought [David] Nuge on as a bit more of a focal point, I actually thought Scott went to the left and drifted out of the game a bit, so that’s why I flipped him back onto the right and I thought he came back into the game.

“I think he’s shown today that he can certainly play off either side, he’s got that yard of pace, he can pick up the pockets and get on the half turn really quickly.”

The gaffer admitted that some things needed to be addressed in the dressing room at the interval but was pleased to see a reaction from his players thereafter.

“Second half was certainly a step-up in terms of performance from the first half and that’s pleasing because we know we had it in our locker and that’s what I said to them at half-time,” he added.

“If you come in 1-1 at half-time and we know we can do better, that should hopefully help us and we needed to go and perform better and we did and I thought we were unfortunate we didn’t win it.

“Obviously, Alan’s chance was the best chance at the end, but one of the best chances I thought was Patrick’s, he’s headed it down, he’s six yards out, he got over his man and I thought that was a goal he scored here at home the last time against Charlton.

“It was a really good opportunity and he just gets too much on it in terms of putting it down and it bounces up and the ‘keeper just flicks it over the bar.