Alex Neil was pleased to his side’s impressive record in local derby matches continue as the Lilywhites came away from the DW Stadium with a 2-1 in over Wigan Athletic.

North End scored early in both halves, firstly through Tom Barkhuizen and later Daniel Johnson, ensuring they secured all three points to move back into the top six of the Championship. 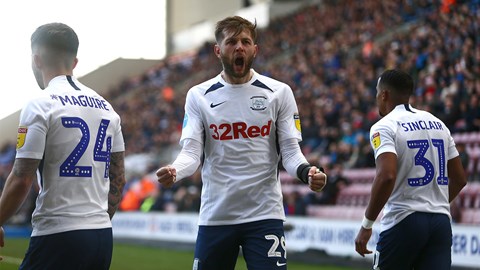 Chey Dunkley pulled one back for the hosts just before the hour mark but the Lilywhites defended resolutely thereafter to see out the win, and the gaffer told iFollow PNE that his side what was required to earn the victory.

“I think that what we did is we played in spells, but I thought when we had our spells, we hurt Wigan,” he said. “We scored two really good goals, arguably could have been two more – I think Seani’s [Maguire] header is a great header and there’s not much more he can do, the ‘keeper makes a fantastic save.

“Scotty [Sinclair] goes through in the first half as well and should probably score as well with the quality he’s got. The pleasing thing is in terms of how we approached the game, we knew it was important.

The manager was also full of praise for his midfield’s contribution, both in this game and across the season as a whole, with Barkhuizen and Johnson both scoring their tenth goals of the season and man-of-the-match Ben Pearson playing an influential role from deep.

“I think that our midfield have chipped in with some amount of goals this year, I think that’s DJ on ten and Tommy B on ten, which I think is the best [season tally] for both and there’s still 15 games left.

“They should be really pleased with their contribution and obviously we’re going to have to continue that for the next 15 games as well.

“He [Ben] can edge himself to the edge and find those passes, obviously we’re playing him as a sitter, but there’s no reason why, certainly if his man drops in, he can’t go the full way with him and go and be around the edge of the box.

“We know he’s got that quality, Ben, it was a good performance from him today which is pleasing.”

The manager remained concentrated on what his own side does, after results elsewhere allowed his side to move back into the top six of the division, and believes the remaining matches this month will prove key for his side.

“I’ll be honest, I’m not really bothered what anybody else does. We need to try to take care of games, I’ve spoken about how important this month is, that’s us now picked four points out of six, which is good.

“We’re unbeaten in five away from home, which is good, and we’ve still got the best home record in the division.

“We’re in good shape and I said after January, that’s when it really kicks in. I do believe that in this next five games is going to have a big factor on where we finish.”

And with over 3,000 travelling North End fans packed inside the DW Stadium, the manager admitted the fans’ impact going forward will be vital for his team.

“Our away fans have always been great, haven’t they? They travel in their numbers, they’re very vocal, they give the lads their backing and even at the end where we’re hanging in, you can hear them willing us on to go and get across the line.

“We’re going to need all of that between now and the end of the season.”