Alex Neil felt his side’s set-up and first half display in particular went unrewarded as they were beaten by two second half goals in a 2-0 defeat to Fulham at Craven Cottage.

The Lilywhites took the game to their promotion-chasing rivals and created a number of fine first half chances in the capital but were unable to capitalise on those, with David Nugent’s unfortunate own goal and Aboubakar Kamara’s second deep in added time ensuring it was Scott Parker’s team that took the points.

And speaking to iFollow PNE after the game, the manager said that his side had not received their just rewards for their performance, admitting, however that they themselves were partly to blame for that. 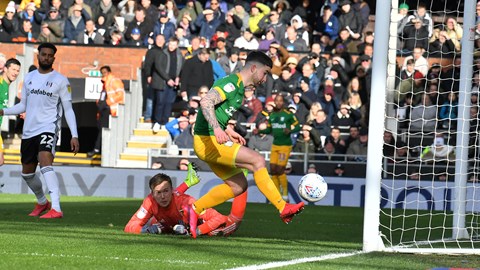 “Disappointed, frustrated, annoyed – every emotion that you can think of along those lines,” he said. “I thought our set-up was great, I thought the boys worked really, really hard, I thought our pressing was excellent, I thought defensively, there were some terrific performances.

“We countered and broke really well, but the biggest difficulty we had was we weren’t clinical when we made chances. We had a goal disallowed, which I’m not sure is offside, I’ll need to see that back.

“We get into really good areas at times, we had two really good chances, Pottsy’s hit a great strike, the ‘keeper’s out of his goal when he scuffs it, it’s going right it in the net and the boy blocks it.

“We had some really good chances first half, when you come away to Fulham and press and play and as organised as well as we are, you’ve got to get something from the game. I said to the lads at half-time, ‘Basically, apart from you not getting a goal, it’s a perfect away performance in the first half.’

“I thought we started brightly in the second half, the corner comes in and we head the ball in our own net and after that, it just becomes really difficult because they’ve got an advantage, they keep their full backs in, they don’t really need to overexpose themselves.

“We make a couple of changes to try a give ourselves a fresh impetus, didn’t really have much effect if I’m being honest and I just felt that we got a chance right at the death, put a corner in the box – we’ve got big Jayden on the pitch and big Pat up there – and we shank the corner and then they break and get the goal. It wasn’t what we deserved but that’s what happened.

“We need points at the moment and we’ve come away to a really difficult venue, I thought our set-up was really good, I thought the boys played really well, they tried their hearts out, and when that happens you want them to get their rewards for it and we didn’t get our rewards, but partly because of ourselves and partly because we lacked that bit of clinical edge that we need to beat top teams at this level.” 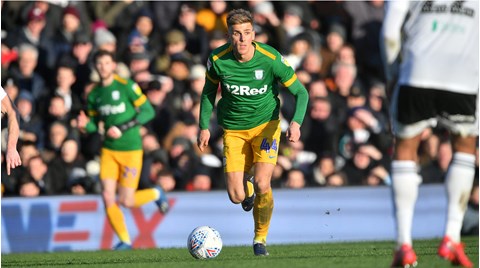 Brad Potts: “We Had To Score When We Were On Top”

The manager thought Fulham should have been reduced to ten men in the first half.

“I thought [Anthony] Knockaert lifted his hand and hit Darnell Fisher in the face. It was right in front of me, I was five yards away and I remonstrated to the fourth official because there’s one thing for certain, if Darnell Fisher did it to Knockaert, I don’t think it’s any question he’s off the pitch.”

The manager praised his midfield trio in the absence of the unvailable duo of Paul Gallagher and Ben Pearson, providing greater clarity on why they were not involved.

“Gally was ill, Gally travelled down with us yesterday and he had symptoms of a cold or flu. We were hoping he was going to be okay and overnight he took a turn for the worse, so we sent him back up on the train this morning, with a couple of days off he’ll be fine.

“Ben Pearson, however, has hurt his hamstring and is going to miss at least the next month. Everybody that supports Preston is going to understand how big that is for us. The one thing I want to make clear is we didn’t lose the game because Ben Pearson didn’t play, because I thought Alan Browne, DJ [Daniel Johnson] and Brad Potts were excellent in the middle today. But Ben will be a miss going forward, I don’t think there’s any question of that.”

The manager also gave a mention to the 1,964 sell-out away end, and was disappointed not to have seen them rewarded with three points.

“I thought they saw all of that. However, we’ve sort of shot ourselves in the foot and we’ve not taken anything from the game, so that’s a disappointment for them and for us.”