Andrew Hughes was frustrated that Preston North End couldn’t make their impressive start to the game count in Millwall’s visit to Deepdale, as the Lions left PR1 with a 1-0 victory thanks to Shaun Hutchinson’s 78th-minute header. 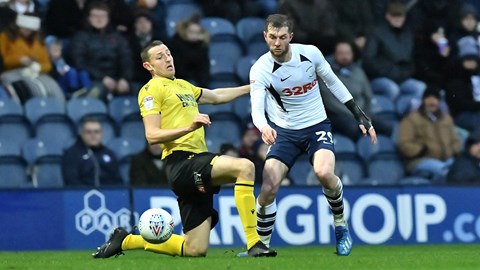 The Lilywhites forged some fine openings in the early stages of the first half and also had a penalty appeal through Tom Barkhuizen, but the conditions turned on the cusp of the second half and it was the visitors that claimed the decisive goal.

Speaking to iFollow PNE after the game, the Welsh defender said that his and his team-mates’ impressive start made the subsequent defeat all the more frustrating.

“I think that’s a big part of the game in this league; when you’re on top in games, you have to take your chances. I thought there should have been a penalty on Barky.

“I know DJ [Daniel Johnson] had a good chance, [David Nugent] Nuge has put one over the top and we’ve had one called offside, but we’re creating good chances so I think when we’re on top we have to get a goal.

“That’s the most frustrating thing; I think for the first 25, 30 minutes, we dominated the game, we penned them in and we were unfortunate not to get a goal. To concede from a set piece is so frustrating.”

The Lilywhites’ No.16 also noted the importance of the first goal – and how if the Lilywhites had managed to get that, that the outcome may have been different.

“I think if we’d have got that first goal in the first 25 to 30 minutes it would have been a different outcome today,” he added.

“It was really windy out there and that probably played into their hands if anything. We know they’re a threat from set pieces so we’ve got to be switched on and I think second phase just caught us off guard and we’ve got to be better there.”

While the Lilywhites remained in the top six after teams around them failed to gain ground elsewhere on the day, Hughes couldn’t hide his disappointment not to have extended the gap between North End and their league rivals and made it nine points from nine.

“We’re trying not to look at it like that [remaining in the top six], we’re frustrated that we’ve not gained ground. That’s the most frustrating thing for us.

“At the start of the week, we probably would have taken that [six points out of nine]. But after the two away performances and results, we’re coming on to today’s game thinking all nine points, so it’s one of them.”

Watch more from Hughesy by clicking on the video above.