It was a game of two halves as North End saw off Oldham Athletic with a second half rout to earn a 4-0 win.

After an evenly contested first half which saw the sides go in goalless at the break, PNE stole the show in the second half with goals from Tyrhys Dolan, Louis Potts and Harry Huddart, before Lewis Leigh wrapped things up for the Lilywhites ten minutes from time.

There were five changes to the PNE side that were harshly beaten by Blackburn Rovers in the FA Youth Cup fifth round tie at Ewood Park four days prior.

The game had initially looked in doubt after a night of heavy rainfall and strong winds, which resulted in an early morning pitch inspection, before the officials agreed it was playable.

It was clear that strong winds and difficult weather conditions were playing a factor early on; both teams struggled to keep the ball or create any clear-cut opportunities.

The first goalscoring chance fell for PNE after 38 minutes as Brian McManus had his long-range effort tipped onto the bar, along with a rebounded effort smartly saved by the visiting goalkeeper, ensuring the sides went in level at the break.

Oldham started the brighter of the two sides, as they went closest to breaking the deadlock in the 50th minute, the resulting effort just flashed wide. 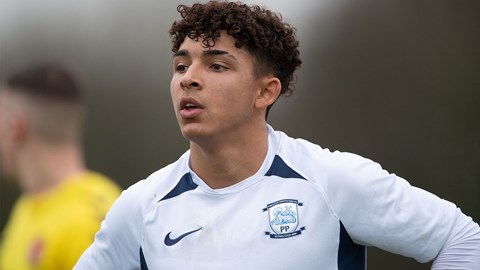 Tyrhys Dolan: “I Will Keep Being Confident”

It was PNE who opened the scoring three minutes later, after Dolan placed a right-footed strike into the far-left corner from 25 yards, leaving the keeper helpless.

Dolan’s first started what was to be an eventual scoring spree for PNE, as Potts added a second after he climbed the highest to steer in a towering header and double the Lilywhites’ lead on 62 minutes.

It wasn’t all plain sailing for the home side as Oldham forced Lombard into making two crucial saves within the space of three minutes to keep his clean sheet intact and prevent any late revival from the visitors.

Oldham enjoyed their best spell of the match, as they looked for a way back into the game. Despite the Latics’ high press, PNE soaked up the pressure and began to look dangerous on the counter attack.

The Lilywhites regained control of the game and possession, playing nice one-touch football resulting in a succession of corners and free-kicks in dangerous areas, as the home side pressed for another goal to ensure a crucial three points.

And PNE did add a third on 76 minutes, making sure any hopes of an Oldham comeback were all but over. Harry Huddart was the man on the scoresheet after he drilled a delightful low placed shot into the bottom corner moments after coming on as a second half substitute.

It was to be another substitute to wrap things up for North End as Lewis Leigh made it four, after his curling effort rippled the back of the net from inside the 18-yard box.

A five-star display was almost topped off by a fifth goal, as McManus saw his long-range attempt just sail wide of the post.

It was a very convincing second half display from PNE, that the difference as they ran out 4-0 winners.

Speaking after the game, Academy manager Nick Harrison was full of praise for his players after their FA Youth Cup exit.

“We just said to the players at full-time today that Tuesday was a disappointment, it always is to lose games, but today was a great response and I am really pleased with the way we performed,” he said.

After two of his second half substitutions both got on the score sheet, Nick said he was pleased with the squad he has.

“We have got good players; these are young players that have come off the bench, but I think that’s the nature of academy football.

“We have done what we have always done and that’s promoted younger players and tried to give them a pathway.”

Nick also gave a special mention to under-15 right back Seary for his “outstanding performance” as he played the full 90 minutes, helping PNE to seal an impressive three points in the North West Youth Alliance league.