Preston North End captain Paul Gallagher was delighted with the bravery shown by the Lilywhites as they came from behind at half-time to defeat Hull City at Deepdale. 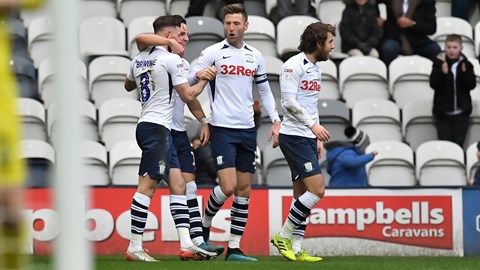 22 February 2020
The experienced No.12 brought his side back on level terms midway through the second period from the penalty spot – the side’s record ninth converted league penalty this season – which set them on the way to another three points, with substitutes Jayden Stockley and Alan Browne combining for the Irishman to head home the winner just five minutes after the equaliser.
Speaking to iFollow PNE after the game Gally said that the most important thing in the game has been securing the victory: “I think the most important thing was coming away with the three points,” he explained.
“At half-time, we knew we didn’t move the ball as well as we wanted to, and you could see the crowd getting annoyed, but we need to stick together and you could see that in the second half.
“We said at half-time that if we get the next goal, we’ll go on and win the game and that’s what it was.
“You saw the reaction of the players in that second half – the bravery, taking risks on the ball, we had to – that’s the way the manager wanted us to play and we got our rewards in the end.

“The subs that came on made a massive impact – Alan and Jayden – I thought they changed the game for us really.

“At this time of the season, it’s about getting three points, no-one looks at the performance, you just look at the table and see we’ve got the three points.”
Whilst there were some good chances created in the first half, it took words from the manager to create more intent after the interval and the former Leicester City man felt they started to move the ball quicker and more effectively.
“If you look at the personnel he picked, they’re probably players that can manoeuvre the ball and you want them players to get on the ball, but it wasn’t happening first half,” he continued.
“We were turning the ball too early and it wasn’t picking out that final pass into people’s feet. Second half we did that a lot more and you could see with the opportunities we were creating.
“To be fair, I think Hull couldn’t get out at one stage; we had them pinned in because we kept circling the ball, going out left to right. I thought Darnell was a good outlet for us down the right-hand side as well and we got our rewards from doing that.
“I think you look at the first half, we still created some decent chances, [it is] just disappointing that they had a free header in the box – we need to tighten that up really.
“We’ve got some big lads in there who can head the ball, so it was just disappointing how we conceded the goal. But we got in at half-time, had a good chat, came out and I think you could see the intent – we were on the front foot, picking up a lot more second balls, passing better, creating more chances.
“You look around the pitch and we’ve got goals, Alan comes on and scores a great header.

“It’s a great ball from Jayden, I think he’s probably wishing he could go and get on the end of it himself.

“In the first half, Tommy and Seani had some good headers, but they just fell the wrong side and the ’keeper made a good save. It’s about being brave, keep creating chances, try to get on the end of them when they’re going for you and it’s all about the three points at the end of the day.”
He was full of praise for the quality of what proved to be the winning goal and is now looking forward to two big away games coming up this week.
“It was a special goal, I think. You look at the delivery, the time of the header, he headed it back across goal – where the ’keeper had come from – and it was so nice to watch from where I was.
“I think them two came on and gave us a real lift, no disrespect to the lads that had gone off, but it was probably a game for them two really.
“It was a good way to get the winning goal.
“All the pressure is on West Brom and Fulham [this week]. We’ll go there confident. The most important thing today was getting back to winning ways.
“We were disappointed last week against Millwall so to get back to winning ways was important and we go there in confidence and the results went our way.
“It’s about us, keeping our foot on the gas and trying to get closer to them top two as well,” he added.