The Lilywhites produced a stirring comeback to pick up three vital points at Deepdale thanks to second half goals from Paul Gallagher and Alan Browne. 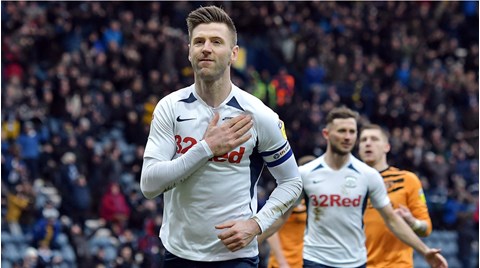 22 February 2020
Mallik Wilks had put the visitors ahead with a close-range header five minutes before half-time, but after the interval Alex Neil’s side dominated proceedings and deservedly took the win.
The manager had made four changes prior to kick-off, Daniel Johnson absent with a knock, with Darnell Fisher, Gallagher, Josh Harrop and Sean Maguire coming in from the previous week.
For the second consecutive Saturday, the wind was swirling around the stadium in the first half, making conditions difficult, but the better of the chances still came to the side in white.
On 25 minutes Gallagher found space on the left to whip a cross in to around the penalty spot, where Maguire rose highest to flick a header that had George Long in the Tigers’ goal flat-footed, but the wind seemed to drag the ball just past the right-hand upright.
The Irishman turned provider for a great opportunity nine minutes later as he delivered from a similar position from which Gallagher had earlier done and Tom Barkhuizen brought a superb save from Long and when the ball came back to the No.29, he was unable to keep his shot down.
But the visitors from Humberside took the lead before half-time. They always looked a threat from set pieces with plenty of height in the side and George Honeyman cut a corner on the left back to Callum Edler whose ball in was met by Wilks in the six-yard box and he headed in from close range.
However, after the break, the Lilywhites were on the front from the off, with the fans also upping the ante.
They were unlucky not to be on level terms on 55 minutes when an excellent team move saw Barkhuizen get down the side of the penalty area, pull the ball back for Gallagher, who crossed deep from the left for Fisher, who took the ball on and put into the six-yard box for Maguire, but he was unable to get a full connection and Reece Burke made a superb block on the line.
Shortly after the North End boss made two changes that would ultimately have a huge effect on the outcome of the game, with Browne and Jayden Stockley replacing Scott Sinclair and Maguire.
The equaliser came at the half's mid-point. Browne looked to have been completely upended in the penalty area, but referee Steve Martin saw nothing wrong, only for within five seconds Fisher to burst back into the box and as he was squeezed out by two City players, the whistle went and a penalty was awarded.

Gallagher calmly undertook his usual routine with his back to goal, before turning and powering the spot kick past Long into the roof of the net.

And within five minutes the scoreline had been turned on its head, with the two substitutes combining superbly; Stockley breaking out to the left side of the penalty area, before curling a left-footed ball with pace into the area for the onrushing Browne to head the ball back across the goal into the top left corner, to give Long no chance and send the Deepdale faithful into raptures.
The game then saw the visitors having to come out, looking to use long throws and crosses into the box as the main threat, but this allowed PNE to use the pace and ability of Barkhuizen and Harrop on the break, with opportunities to stretch the game.
From one of those, in the middle of the seven and a half minutes added on, Harrop was horribly upended right on the edge of the penalty area and the former Manchester United midfielder picked himself up and curled a free kick over the wall, forcing Long to tip the ball over the bar at full-stretch.
The game management in those added on minutes was excellent from the home side, as they took the win, that tightened up the top six even more, with one point now covering the four sides occupying the Play-Off places.
PNE line-up: Rudd, Fisher, Hughes, Pearson, Bauer, Davies, Barkhuizen, Gallagher (c) (Potts, 89), Maguire (Browne, 58), Harrop, Sinclair (Stockley, 58). Subs not used: Ripley, Clarke, Rafferty, Nugent.
Hull City line-up: Long, De Wijs, Burke, Eaves (Toral, 64), Honeyman (Balogh, 77), Pennington, Elder Maddison, 90), Magennis, Irvine (c), Da Silva Lopes, Wilks. Subs not used: Ingram, Stewart, McKenzie, McLoughlin.
Attendance: 12,342 (721 Hull City fans)
Referee: Mr S Martin