PNE youth team forward Tyrhys Dolan responded to Tuesday night’s FA Youth Cup exit with a goal during a 4-0 thumping of fellow league competitors Oldham Athletic and has challenged himself to keep the momentum going.

Speaking to the club website after the victory, North End’s No.10 said: “Two goals in two games now is certainly a positive for me to build on, it was also a good response to the FA Youth Cup defeat; I will hopefully carry this form on to the end of the season”.

The forward played a key role in Saturday’s win, with his exciting style of play and flair, Dolan had looked lively in a first half strongly dominated by extreme weather conditions. 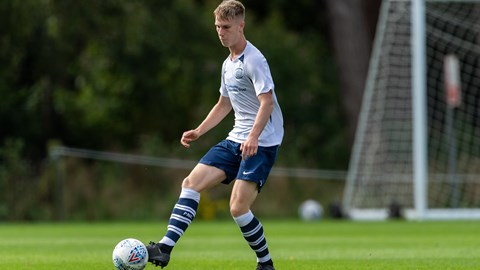 “It was tough to play in the conditions today, you want to try and play football, but it can sometimes be very tough to do that, the strong winds didn’t really help.

“When we came out second half, we tried to play more exciting football, more one-touch passing, moving the ball quicker and that helped us get the win.”

Dolan had opened the scoring on 53 minutes with a well taken goal to set North End on their way to a convincing victory after his 25-yard effort left the visiting goalkeeper helpless.

“I just created an angle for myself, I saw the ‘keeper slightly to his right, so I had a go and thankfully it went in.”

The supporters in attendance at the UCLAN Sports arena were certainly entertained by the exciting youth prospect, as the No.10 continued to look dangerous throughout the second half and was influential in orchestrating a stunning second half display.

The young forward will be hoping to keep this good form going as PNE travel to Shrewsbury Town next for another North West Youth Alliance league game, Dolan said the team must keep going and put the FA Youth Cup defeat to Blackburn Rovers behind them.

“We have to keep moving forward and keep improving, I want to put the Blackburn game behind us, my main aim is to keep being positive and hopefully keep the momentum going to the final game.”