Preston North End welcome the Lions to Deepdale for the 32nd time in league action this weekend.

13 February 2020
The Lilywhites trail in the overall league head-to-head with 25 wins to Millwall’s 27 since the first league meeting in October 1928, when the London side came out 4-3 winners.
Down the years there have been some tight affairs, but the biggest winning margin for North End in PR1 came in December 1971, when they put four past their visitors without reply.
Our game from the archives though comes from 20 years ago, when David Moyes’ side celebrated promotion in style with a thrilling victory in front of a sold out Deepdale, ahead of the presentation of the division two trophy.
The Lilywhites had both clinched promotion and won the title five days earlier – bizarrely after being beaten at Cambridge and this was to be a triumphant homecoming for Moyes’ men.

Fittingly, they finished their home campaign with a victory – all three North End goals coming in the first half, two of them before the clock had reached the eighth minute! Millwall pulled two goals back after the interval, but thankfully did not spoil the party.

It was to be a 15th home win of the season and 19,500 fans were packed inside the ground to see it.
PNE opened the scoring before a Millwall player had touched the ball.
After the Lilywhites had taken kick-off, Brett Angell won a free-kick after being pushed by David Tuttle. David Eyres swung over the free-kick which travelled into the net without anyone getting a touch.
Angell had stuck his head towards it and tried to claim the goal, but Eyres was rightly credited with it. Just 31 seconds were on the clock and already the party had started.
North End survived a strong shout for a penalty at the other end when Millwall striker Neil Harris went down in a heap between Ryan Kidd and Rob Edwards, but they made it 2-0 in the eighth minute, Eyres rolling a short corner to Icelandic striker Bjarki Gunnlaugsson.

Eyres collected the return pass and whipped in a cross which keeper David Warner fumbled after bumping into a team-mate. With the ball on the floor, Michael Jackson was first to it and scooped a shot into the roof of the net. 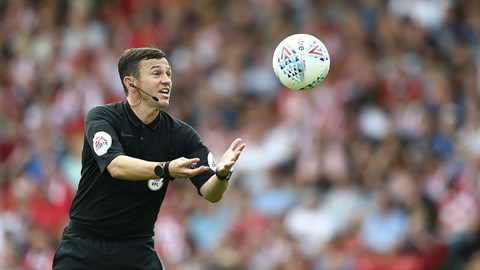 13 February 2020
Warner had an eventful few minutes, saving well from Paul McKenna and denying Graham Alexander. He was also booked for a foul on Gunnlaugsson on the edge of the box, fortunate that he did not see red.
North End made it 3-0 in the 40th minute. McKenna rode a tackle from Robbie Ryan down the right wing and sent over a low cross which Angell stabbed into the net from close range. It was the seventh goal of Angell’s time on loan from Stockport and he was to bag another in the final game at Bristol City the following week.
If North End had bossed the first half, it was Millwall who enjoyed the better of the second as they looked for a way back into the contest. Just two minutes after the interval, a cross from Harris was helped on to Paul Ifill.
The midfielder took the ball round Edwards on the right-hand side of the box and hammered a shot past Tepi Molianen.
Seven minutes later, the visitors had a second goal. Harris got past Kidd down the right channel and pulled back a cross for Lucas Neill to fire home from 15 yards.
Millwall had chances for an equaliser, while PNE created enough openings to extend the lead. As it was, it remained 3-2 and then the next part of the party started.
The trophy presentation saw Sir Tom Finney join the players and coaching staff on the pitch. Sean Gregan lifted the trophy, PNE’s skipper having missed the final stages of the season after breaking a bone in his back.