Preston North End manager Alex Neil is excited at the prospect of facing former employers Norwich City in the third round of the Emirates FA Cup this weekend.

2 January 2020
The Lilywhites boss took charge of the Canaries just days after they had lost to PNE in the only other FA Cup clash between the sides, almost five years ago to the day this weekend and he reflected on this irony when he previewed the game with iFollow PNE.
“It is going to be a game for against a club where I worked for the best part of two years and I enjoyed my time there,” he explained. “It was a big learning curve for me and this will be a good game.
“I am sure they will want to get a victory under their belt, to give them a bit of confidence and we are obviously the same.
“It is strange how things work out, but North End obviously won that game and subsequently I got the opportunity to go there. I had good times there and have a great memory of getting promoted through the Play-Offs, but my focus is now on Preston North End.

“Norwich right now are finding it tough in the Premier League – which is a really difficult level – but they will be looking to get into the next round of the FA Cup, as we will.”

2 January 2020
The scorer of both goals when the two sides met on 3rd January 2015 was Paul Gallagher, who Alex believes was rightly named the club’s player of the decade on New Year’s Day.
“Gally has never really relied upon speed or things like that,” continued the gaffer. “He has a few yards in his head and his quality is there for everyone to see.
“I am not really surprised that the fans have voted him the player of the decade, because of what he has contributed since his has been here.
“He very rarely misses training and games, so he is normally available and he has been an unbelievable servant of the club and it is a great accolade for him.”
The big question for teams up and down the country this weekend, will be whether, after the busy Christmas period, they should make changes to their starting XI and the North End boss says there are a number of factors involved in this decision.

“For us, there are a couple of things to consider. Our form hasn’t been great of late and there will be other lads hoping to get an opportunity and this is a great opportunity to give them that chance. 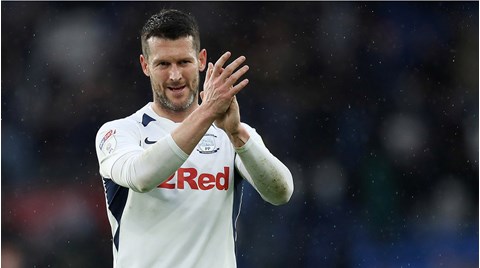 2 January 2020
“Naturally, some of the other boys will need freshening up after recent weeks and this is a great game for us.
“What we had going into the Christmas games was a lot of players who had not had a lot of football before it and that has been an issue for us. These boys came in and had to rattle out four games in ten days and that is a lot to go from doing very little to and we need to pay attention to them.
“But the other lads will want to come in and show what they can do and we need to see them in competitive action to see whether or not they are ready to go and start the next one after that or not,” he added.