Alex Neil was satisfied to take a point from what he described as a ‘scrappy’ Lancashire derby, as Blackburn Rovers and Preston North End played out a 1-1 draw at Ewood Park.

Josh Harrop scored a rocket on the half volley to cancel just shy of a quarter of an hour after Adam Armstrong’s third-minute opener.

The manager felt there were a number of elements which prevented either side from playing much free-flowing football on a wet afternoon in East Lancashire and he told iFollow PNE post-match that he was pleased to emerge from the contest with a point. 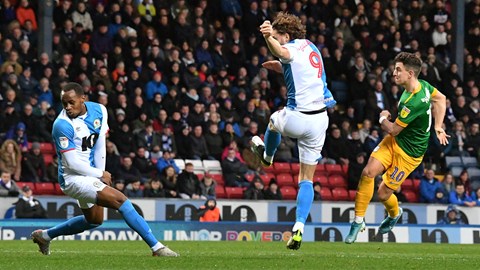 “Certainly, after the first half, I thought it was [a good point],” he said. “If you look at our start, I thought the first couple of phases we looked quite bright, Seani took it down the side, I thought he looked quite threatening and took it in really well.

“And then we just make a mistake, we got an opportunity to repair it – we don’t – and then it falls to Armstrong and he sticks it in the bottom corner.

“At that stage, you’re always concerned because you don’t want to have that negative momentum, but to be fair to the lads, they rallied not long after that. Josh Harrop, a fantastic strike from the edge of the box – it was a stunning strike.

“I thought from that point onwards, probably about the first 20 minutes we did okay, but after that they settled, we didn’t really get our press right in terms of trying to hunt the ball and they played through us and they dominated most of the first half.

“We found it difficult, albeit they didn’t create a lot of clear-cut chances off the back of that. Second half, we had a chat, I was more aggressive in terms of locking onto them and I thought that helped us enormously.

“Second half, we were better, but again I thought it was quite a scrappy game. It was difficult and you could see what it meant to the two teams as well. Equally, they’ve had a couple of games where they’ve lost as well, so I thought it was important we got something from the game – that was crucial.”

Scott Sinclair was included in the matchday squad for the first time since making his midweek move from Celtic, coming off the bench for the final ten minutes to make his debut for the club.

“We threw caution to the wind a little bit, went with [Brad] Pottsy, I put Scott [Sinclair] on wide,” the boss added.

“I know the fans are obviously shouting to put Scott on, but he’s at a stage at the moment where, unfortunately for him – and it’s not through his fault – he’s not played a lot of minutes.

“I think his last game was a month ago and then before that was another probably six to eight weeks. We just need to try to get him up to speed as quick as we can.”

It was a third successive draw on the road for the Lilywhites and the manager feels there are only fine margins stopping his team from turning those stalemates into victories.

“That’s what we’ve not done recently [score the first goal]. We’ve had opportunities and chances to get the goals, but we’ve not taken them.

“We just need to cut out silly errors, that’s what’s costing us at the moment. Earlier in the season, we weren’t making those – we were playing freely, playing confidently. I think at the moment, you can see today we had to tighten it up a little bit, make sure we were harder to beat, because there’s one thing playing freely but if you’re losing, you need to change it.

“We did change it a bit today, albeit we went a little bit loose at the top in terms of the lads that are capable of creating something for us. We take a point and move onto the next one.”

Watch more from the gaffer by clicking on the video above.