Tom Barkhuizen praised the influence of team-mate Daniel Johnson following the Lilywhites’ 3-0 away win against Barnsley and admitted it has been no coincidence that the team have won two out of two since his return from injury.

Johnson played his part in a flowing move to see Barkhuizen open the scoring after 19 minutes, before adding his own name to the scoresheet ten minutes before the break.

Barkhuizen’s second on the stroke of the half-time completed the scoring for Alex Neil’s side, seeing him and Johnson joint top of the North End goalscoring charts with nine goals apiece – the 26-year-old viewing the shared burden of finding the net as a positive. 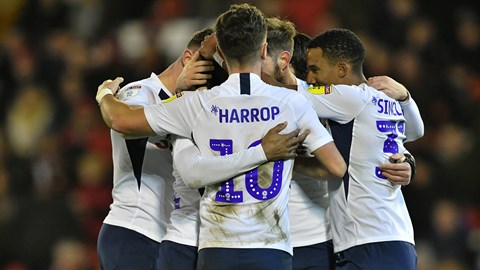 “I’ve not scored for a while, I’ve chipped in with a few assists but not managed to get on the scoresheet, so to get two in one game it’s something that hasn’t happened for a while and then I’ve got that twice this season so long may it continu,” the No.29 told iFollow PNE.

“It just shows that we share it [goalscoring] about. We haven’t got someone who we rely on to get all of our goals, DJ has been out for a while as well and to get two wins with him coming back is no coincidence because he’s such a big player for us.

“He gives the forward players confidence going forward knowing he can pick a pass and he’s going to chip in with his fair share.”

Barkhuizen had a hand in Johnson’s strike, too, playing in Josh Harrop, whose shot was blocked before his team-mate converted the loose ball into the bottom corner.

“Josh has been getting in some really good positions recently and he’s just dangled off the back of the centre halves and I’ve pulled it back and I thought he was going to shoot first time with the way he’s been playing and the confidence that he’s got,” he continued.

“But DJ, it fell to his right foot and you’re thinking, ‘Please, just hit the target’ and it’s managed to trickle in the bottom corner.

Although a convincing scoreline by the break, which would ultimately prove how it finished as well, Barkhuizen felt it was a scrappy affair at Oakwell.

“We changed shape to match them up and it worked down to a tee. First half, when you go in at 3-0, the second half is just about containing and you want to try to nick another one but you just want to keep it at 3-0 to be honest and make sure they don’t get a goal to get a leg up and give them more confidence to get back into the game.

“A scrappy game, I think there’s no denying that it wasn’t a classic, 3-0 looks good on paper but it was a real grind out there. They’re a good team, they’ve come on leaps and bounds since the new manager’s come in, so happy days all round.”

Behind that, though, was a solid defensive performance, as Barkhuizen praised the players behind him while looking ahead to a weekend’s gap, before the next game against Swansea City at the start of next month.

“I think that’s probably the most compact we’ve been as a unit for a while. We’ve been a bit sloppy recently and maybe been a little bit too open.

“The Charlton game, to be fair, we played that way on purpose, but I think when we were going through that bad run, sometimes you just need to shore it up and defend.

“Pat [Bauer] and Davo [Ben Davies] have been monsters at the back and obviously you’ve got Raff and Fish who have been up and down and filling in.

“It’s good, it gives us confidence because we have been on a bit of a bad run and to come through this now and now have a weekend off to get a little bit of a break that a lot of teams don’t get, it’s good for us and now we can really kick on and see what happens.”