There aren’t many Preston North End players down the years who have an FA Cup winners’ medal in the cupboard, but that is the case for striker David Nugent.

2 January 2020
The year after leaving Deepdale, the Lilywhites’ No.35 was part of the Portsmouth squad that were victorious in the competition, meaning it is a special trophy for him.
“I won the FA Cup when I was in my first year at Portsmouth,” he told iFollow PNE. “I have great memories of coming on in the semi and the Final, both at Wembley and we managed to get over the line with Nwankwo Kanu scoring the winner in both, so I managed to get my hands on the FA Cup and a winners’ medal.
“I think it is better for the lower league clubs. They have to start in the early rounds and have to work their way to the third round to try and get a big team; in the Championship it is hard, because if you are doing well in the league, you don’t want the distraction and if you are not doing so well, you want a cup run to keep the fans onside!

“It is hard to put a fully fit team out, but for my memories of the FA Cup, it is a massive competition to be involved in, a massive one to win and I love playing in it.”

2 January 2020
These days it is hard for Championship clubs and there are often big team changes at this stage of the tournament, with the sides have played four games in 11 or 12 days prior to the third round, but Nuge believes it is a game the side should be looking forward to.
“If you have played all four games, you are probably looking for that rest at the weekend – the league is our priority, but we have a Premier League club coming to Deepdale and we want to show what we are about.
“When we play against better teams, we tend to show our best game and all the lads have nothing to lose. Our league form hasn’t been great of late and we have nothing to lose and we can go out there and play with a bit of freedom.
“Norwich are a side who like to play out from the back. They are similar to Brentford, Leeds, Fulham – they are going to play that style of football and if you look at our results against those sort of teams, we have done pretty well.

“Hopefully that proves to be the case again at the weekend and we can get a good result and get into the hat for the next round.” 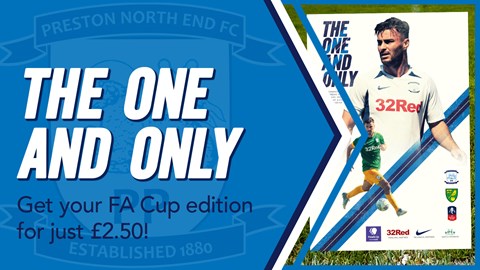 2 January 2020
And he is well aware that for his manager, as a former Canaries boss, it could be an important game: “I am sure it is massive for the gaffer as well. It is his former club and I am sure he will want to put one over on them as well.
“He has got a lot of connections there and we have to go out and play the football that he wants us to play, try and cause an upset and get into the next round. There is also a lot of money in the competition and if we get through it can help the club as well.
“Everyone wants the big teams at Deepdale and you never know, if we can get through this round, we could have the likes of Manchester City here again, like we did in the Carabao Cup. You want to progress and play against the best teams and, for us, the FA Cup is a competition where we can do that, so we want to get through and do just that,” he added.