We have one of the country’s top match officials taking charge of Saturday’s Emirates FA Cup third round tie with Norwich City at Deepdale.

2 January 2020
FIFA, UEFA and Premier League referee Martin Atkinson has been appointed to the game, his first visit to Deepdale since September 2008!
West Yorkshire official, Martin, who joined the league lists in 2003, has refereed some of the biggest games in English football, including the 2011 FA Cup Final, the 2013 Championship Play-Off Final, the 2014 League Cup Final and this season’s Community Shield.
On top of that he has refereed all over Europe in the Champions League and Europa League, as well as at the 2012 and 2016 Euros, where his games included Germany, Portugal and the clash between Wales and Northern Ireland.

His first game here in PR1 came way back in September 2004, when we defeated Stoke City 3-0, before also taking charge of our visit to Wigan Athletic that December. 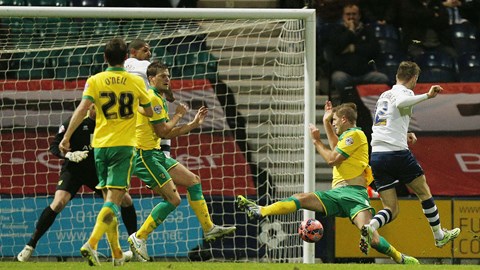 2 January 2020
His third and final PNE game on his CV was back in 2008, when Wolves beat the Lilywhites 3-1 at Deepdale, with Chris Iwelumo grabbing a hat-trick, however, the visitors ended the game with nine men!
His first Norwich City game was also 15 years ago, in April 2005, when the Canaries overcame Charlton Athletic at Carrow Road. With Daniel Farke’s side back in the top flight this season, Martin has also seen them a lot more recently, refereeing their 3-2 home defeat to Chelsea back in August.
This season he has taken charge of 19 games thus far, his last being Newcastle United’s New Year’s Day encounter with Leicester City – having also been the VAR official at Stockley Part for the Foxes’ 2-1 win at West Ham United last Saturday. So far this season he has issued 53 cautions and three red cards.
He will be assisted at the weekend by Harry Lennard and James Mainwaring and the fourth official will be James Adock.