Lincoln McFayden was very happy with the entire team’s performance as PNE U18 beat Blackpool 2-0 at UCLan Sports Arena. 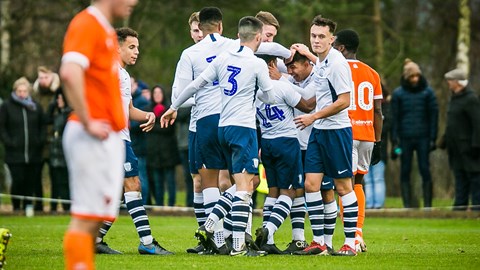 The youth team were winners over their local rivals in the EFL North West Youth Alliance league clash, extending their unbeaten run to 10 games across all competitions.

Speaking to PNE.Com after the game, McFayden said: “It was a great overall performance, everyone played their part today and put 110 percent into it, which is why we got the victory.”

The game saw fantastic strikes from Jacob Holland-Wilkinson and Trhys Dolan that helped secure all three points for Nick Harrison’s Academy side.

However, as a defender, McFayden was especially pleased with another clean sheet for his team, the third in three successive games.

“It’s the best thing to come off the pitch knowing we’ve won and got a clean sheet as well, as we’ve done our job properly.

“We’ve had a couple of clean sheets over the season, so we just want to carry on winning and keep the clean sheets coming, too.”

The young Lilywhites’ unbeaten run stretches all the way back to October, with confidence amongst the group being extremely high at the moment with everybody playing their part in the success.

And McFayden was pleased that their fine form from the end of 2019 has continued into the New Year.

“After 2019 when we won in the FA Youth Cup, it’s a great team spirit. At the minute, everyone is raring to go and we’re winning games, so it’s great to be a part of.”

But before going into the game, PNE sat at the top of the EFL North West Youth Alliance League, with Blackpool in second. This top of the table clash added further meaning to the local derby, one that McFayden and his team-mates were aware of.

“It’s very exciting [playing in a derby], especially as it’s a local one, they’re second in the league as well and we’re first. It was a good to play against them and a great win as well; 2-0 and a clean sheet.”