Sitting in first place in the North West Youth Alliance league going into the game, the young Lilywhites made a strong start to the game, with Louis Potts’ first half brace ensuring a two-goal cushion at the break.

But the visitors responded in the second half as Barry Baggley, Kian Makepeace and Lewis Cooke all hit the target, ensuring it was the Cod Army who took all three points, taking them from second place ahead of the game to now being joint top of the league alongside PNE.

Nick Harrison made two changes to the team that beat Oxford United at Deepdale in the FA Youth Cup on Monday night, Potts replacing Ethan Walker – who has since been loaned out to Stalybridge Celtic – and Harry Huddart coming in for the injured Ben Dooley. 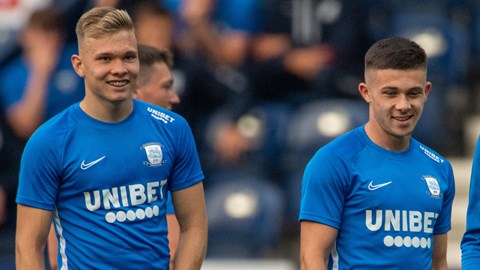 The home side were by and large the dominant outfit for the opening period of the game, but only came close to making their possession count when Potts shot over the crossbar and Tyler Williams couldn’t quite stretch to meet Lewis Coulton’s corner.

There had been a slight opening for Fleetwood as well, when Anthony Williams’ header looped into the air and forced Jimmy Corcoran to palm away.

A much more purposeful header from Carl Johnston threatened to break the deadlock minutes later, as he met Billy Batch’s left-wing delivery, but planted his effort against the left-hand post.

The Lilywhites continued on the frontfoot, with Tyrhys Dolan not quite able to turn home the cutback from Jacob Holland-Wilksinon, before, between them, Potts and Joe Nolan somehow failed to score – the former denied by Scott Pengelly’s fine one-on-one save, the latter perhaps even more unfortunate to see Sam Barrett to clear his rebound off the line.

PNE did make a deserved breakthrough just before the half hour mark. Dolan’s anticipation allowed him to edge into the box and prod the ball past Pengelly, and although a defender got back to prevent him turning over the line, Potts ran onto the subsequent loose ball and hammered home first time from ten yards.

Fleetwood saw more of the ball from that point onwards but North End continued to carve out openings, and were unfortunate not to make one count two minutes before the break.

Holland-Wilkinson again made inroads down the right and delivered perfectly for Potts rushing to the back post, managing to stretch a leg out to meet the cross but convering onto the crossbar. 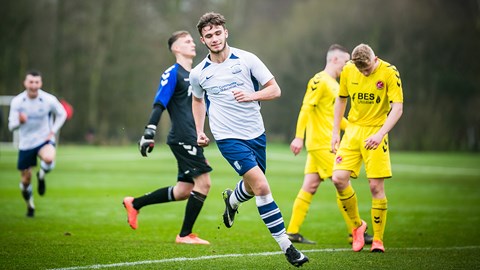 Potts: “We’ll Pick Ourselves Up And Go Again”

But the home side’s No.9 did double his own and the team’s tally in first half added time, again showing predatory instincts in the box as he tapped Lewis Coulton’s cutback from the opposite flank towards goal and beat Pengelly with the help of a slight deflection.

It was a deserved half-time advantage for North End, but the second half very much proved to be one that belonged to the visitors.

They halved the deficit just moments after the whistle blew for the start of the second half, as Batch crossed in from the left and Makepeace got the slightest of touches to flick onto the back post, where Baggley nodded in just three minutes after the restart.

Fleetwood hit the woodwork three times before they drew level, Batch firing onto the crossbar after Lewis Earl had cut out Makepeace’s run into the box, with Earl getting back crucially again to clear when substitute Cooke’s effort rebounded off the underside of the goal frame, and Baggley then clipping the outside of the post from 20 yards.

Take L’s and bounce back we loose some we win some... we keep working!❤️ #pnefc pic.twitter.com/RkzH07bjVr

The equaliser arrived with 20 minutes left on the clock, as Makepeace weaved his way into the box with some neat close control and rifled into the bottom right corner.

Cooke hit the post for a second time minutes later with his low shot from a corner but it proved a case of time of third time lucky for the substitute.

He netted the decisive goal with 12 minutes remaining, receiving the cutback from Baggley down the left side of the box and firing into the far corner.

Although the Lilywhites had two potential penalty shouts in added time through Coulton – one of which earning the Scotland youth international a booking – that proved to be the match-winning effort, thus ending a 12-game unbeaten run for North End’s youngsters.

Academy manager Nick Harrison was pleased with his team’s first half display but suggested they lacked a response when Fleetwood pulled one back early in the second half.

“It was a game of two halves,” he told the club website. “I thought we were very good first half, I thought the work rate and understanding as a team was very good and we deserved to be in the lead.

“Winning the game 2-0 at half-time, the next goal is important and we concede it. What’s disappointing is how we dealt with the game after that. I don’t think the players took enough responsibility on the pitch to affect the game and to try to control it.

“I just thought some poor individual decisions and us not protecting the goal well enough lets them back in the game.”

After their FA Youth Cup exploits over the last week, which saw a win over Oxford United on Monday night with the game having been postponed the previous week, Nick admitted there were some tired bodies in the squad but wouldn’t excuse that for this defeat.

“I think we certainly had a few players that were tired but that’s the nature of football," he continued.

“If they’re going to become professional footballers, especially in the Championship with the number of games there are so close together, they’ve got to experience that.

“They’ve then got to learn for the last parts of the game to keep hold of your lead, to protect the goal and win the game 2-1.”