Louis Potts scored twice on his return to the youth team starting line-up, but it proved to be an outing to forget for him and his team-mates, as Fleetwood Town overturned the striker’s brace with three second half goals to win 3-2.

The second year scholar hit a piledriver beyond Fleetwood goalkeeper Scott Pengelly after 29 minutes, before converting Lewis Coulton’s cutback in first half added time, having also struck the crossbar just minutes before. 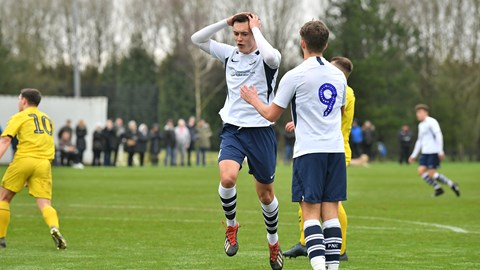 Fleetwood’s exploits after the break soured the work of Potts and his fellow young Lilywhites from the opening 45 minutes, but speaking after the game, the 17-year-old forward stressed how the team must look to revive their good form as soon as possible.

“We started the game well today, we just obviously didn’t finish it great, but all the good work we’ve done doesn’t get forgotten.

“We know ourselves, we’re not daft, that we needed to be much better in the second half. But we will pick ourselves up and go again.”

Today’s defeat now sees Fleetwood go level on points with North End at the top of the North West Youth Alliance, with the Cod Army also having two games in hand.

Although disappointed by that, Potts said the young Lilywhites will concentrate on themselves, while looking forward to some important cup matches in February.

“We’ll stay positive, keep our eyes on ourselves and we’ll do the best that we can to stay at the top,” he added.

“We’ve got the [EFL Youth Alliance Cup  northern] semi-final next weekend against Rotherham United and obviously the fifth round of the FA Youth Cup against Blackburn Rovers. I’m sure we can pick ourselves back up and get back on that unbeaten run.

“We definitely need a win next week, to bounce back, pick ourselves up and get our confidence up leading into the FA Youth Cup. Next week is massive for us.”

It proved bittersweet, but on an individual level, Potts was pleased to get back into the starting line-up and help his team-mates by finding the net twice.

“It’s really pleasing to get back into the side and to score two goals.

“It’s brilliant, just as long as I can help the team as much as I can and getting two goals as a striker is helping the team so I was really happy with that.”