Preston North End forward Tom Barkhuizen has used a couple of days off to refresh and focus on the home stretch. 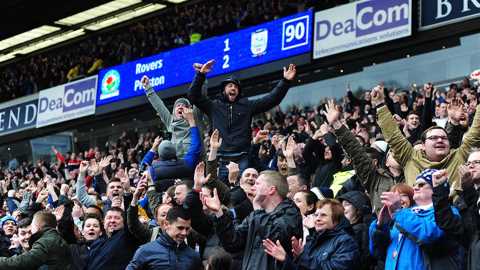 6 January 2020
The Lilywhites attacker spoke to iFollow PNE as the team returned to Springfields to begin preparations for the clash with Blackburn Rovers at Ewood Park this coming weekend.
And the No.29 feels that mentally, a bit of rest was very much required in the dressing room: “It is a good game to come back to,” said Tom. “We have had a couple of days to refresh and clear our minds.
“The last few weeks have been difficult for everyone, on and off the pitch, so it is a good game to come back; there will be a good atmosphere and hopefully we can get back on track and get back in the top six.
“People don’t realise that physically we are training to get through the games, but it is the mental side of it where you are constantly preparing and your mind is on one thing and that is difficult.
“You are thinking about your job 24/7, because you just have game, after game, after game. It is tough and people don’t really understand, so those two days have been good to not think about football, spend a bit of time with our families, because we don’t get much time off over Christmas.

“It allows us to get our focus back. It is easy to lose your focus when you are constantly playing back-to-back games, so we will all get pulling back in the right direction.”

Barky’s record in derby games since his arrival at the club has been excellent, including a brace in the 3-2 comeback win over Tony Mowbray’s side back in October and he is hoping he can play his part again.
“If you look at my record, I have a habit of scoring in these games,” he continued. “Every game is a normal game, but the matches against Blackburn, Wigan and Bolton seem to bring goals for me and having not scored for a while it would be nice to contribute and help us get back on track.
“For the fans it is probably the biggest game of the season and it is always nice to have the bragging rights, which at the moment we have and we want to keep them.
“Our away following are always in good voice, whether we are winning, losing or drawing. They really enjoy the day out – they probably get on the beer early and go and enjoy themselves.
“Our away form hasn’t been great this year, apart from our last two away games, which I think were good points and performances, but I am sure the fans will be in full voice and hopefully we can match what they bring.”
And he feels that despite a difficult festive period, the team are in a strong position going into a vital stage of the season: “Once you see that FA Cup game, you start to see the home stretch and it is time to dig deep and just keep pushing.
“When you look at the table, we are in a really good position. We are four points off third and one win sorts everything out, gets everyone back on the same page and all pulling together.
“There is always going to be blip and the fact that we are still four points off third after the form we have been in, is only a good thing for us. We are looking stronger and we are looking to push ourselves back up there,” he added.