Preston North End midfielder Brad Potts says that the Lilywhites’ honest squad are not looking for excuses for their results since the resumption, instead they are just looking to work even harder.

The No.44, who came into the starting XI for Wednesday night’s clash with Derby County at Deepdale, acknowledged the need for three points in the next game and said that the side would be giving everything to earn it.

“Off the back of two defeats, we know we have put ourselves in a position where we need to start picking up points quickly,” Pottsy told iFollow PNE. “Looking to the next game, we need to go to Huddersfield and get the three points.

“Our home form was really good before the lockdown and I think it has had an impact on our performances at home, but we just have to make sure that we don’t make excuses for things and we get back to what we were doing at the start of the season, which was playing well and winning games.

“We need to be doing that on Saturday if we are to give ourselves a good chance of getting into the Play-Offs.

“We are an honest group, we all work our socks off for each other and that is what has got us where we are now, with a bit of quality as well, so it has been frustrating, because none of us can really put a finger on why we aren’t really picking up the results we want. We are doing everything we can to change things and to get three points.”

We’ve Met Before: Huddersfield Town Away

Starting his first game since the Championship got underway after the coronavirus pandemic caused a three-month postponement, the former Barnsley man said he felt good physically and feels that the team’s sharpness in the final third is something that will hopefully come in the next game.

“I felt alright,” he continued. “We were keeping fit in the off time and we have done a lot of fitness in training leading up to these games, so I felt alright and it was only the closing stages when I felt it a bit in my legs.

“Naturally I am quite a fit lad anyway and it was good to be back out there.

“It was frustrating to concede how we did. Someone like Rooney has that sort of quality, although we said before the game we should try and stop free kicks around the box and then the first one he gets, he scores, which is frustrating.

“But in the second half, we came out and we played well. In the final third we need to start creating more chances and putting them away though. It has been a different pre-season to what we are used to and that sharpness only comes with playing games.

“We have played three games now and the lads are more than used to getting back playing now and hopefully come the weekend we can get a run going.” 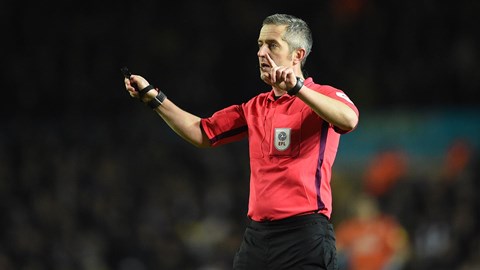 The trip to the John Smith’s Stadium comes after the Terriers picked up a big win over Birmingham City on Wednesday night.

And Brad is expecting a tough game, but says that doing the basics right will be the key to earning the right to play: “They are down the bottom and are fighting and scrapping for every point.

“I am sure their win the other night will have given them confidence, but we just need to get back to basics and doing what we were doing well at the start of season.

“If we go there and play anywhere near to our best, then I am sure we will get the three points.

You can watch the full interview with Brad, with his comments on playing in emoty stadia, then just click on the video at the top of the page.