Alex Neil was left to rue the fine margins at play as his side had to settle for a point against Bristol City to end the 2019/20 season, with the Lilywhites’ dominating the play but ultimately unable to secure victory.

Sean Maguire finished off a superb team move after a quarter of an hour in one of several fine first half openings, but Famara Diédhiou’s early second half equaliser ultimately proved to be their undoing – even with further chances for the visitors thereafter. 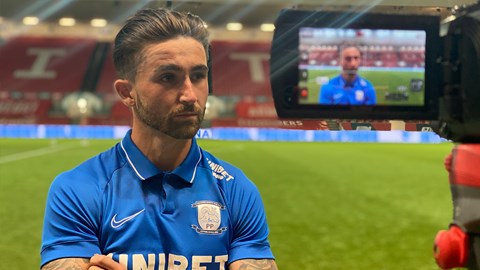 Seani: “The Club Deserved A Lot More This Season”

Speaking to iFollow PNE after the game, the manager confessed that not taking those chances had been symptomatic of North End’s season.

“First half, I thought we were excellent, I thought we controlled the game and I thought our goal was superb,” Alex said. “The one just after that where I think DJ [Daniel Johnson] gets into Seani [Maguire], he gets a shot away and the ‘keeper saves it, and if Brad [Potts] followed that in, that would have been as good as the first one.

“I thought we were on top, I didn’t think they had too many opportunities first half at all. I thought second half we came out, started okay first five minutes, there wasn’t much in it, and then I thought their shape started to cause us issues, we started to tire a little bit in the middle of the pitch.

“Once we changed it, I thought we got better – I thought we had more energy, to be honest. There are a lot of lads played a lot of game time in recent weeks and I thought that there wasn’t a lot in the game for probably the last 20 – 25 minutes, but I thought the better chances probably fell to us.

“Tommy B had a really good chance, I thought there was one Seani drove through and Pottsy’s just outside him, he needs to slip him in.

“I said to the lads afterwards, the one thing you can see is they played really well for spells of the game, I thought their effort levels in terms of their endeavour was excellent, but we switch off for the goal and then the opportunities that do come our way, we need to score more than one.

“I said to them, ‘To be honest, that’s probably summed up our season’, because it’s those margins that have ultimately cost us in terms of falling short of the Play-Offs.”

A 4-1 defeat for Nottingham Forest and victory by the same scoreline for Swansea City saw the Welsh outfit break into the Play-Off places at Forest’s expense in dramatic fashion elsewhere on the final day’s action. 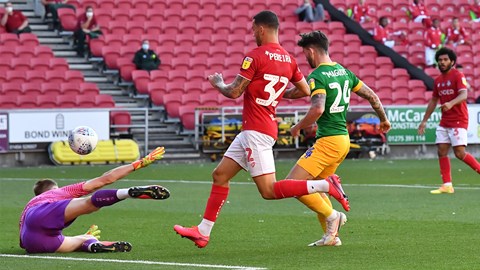 Alex admitted that made for a bittersweet feeling after his side finished the campaign with just one defeat in the last six, but the boss remains confident that his side can make another promotion push next term.

“When you find out all the drama that has went on elsewhere, it’s just incredible,” continued the gaffer. “It’s a little bit bittersweet because I thought it was a good performance but I thought we should have won the game and obviously we didn’t. This is one that I think we’ll always look back on and think we could have done a little bit better.

“I said to the lads, we spoke about some of the teams that are in the Play-Offs and we honestly don’t feel as if that they’re far better than us.

“I think what we need to do is go away, clear our heads, get a break and then come back really determined for next season, hope that we can try to bolster the squad or add in a few areas that we need to help us and if we can get that, there’s no reason why, by certainly retaining the majority of the squad that we’ve got, why we can’t really push on and kick on next year.”

In the same way that he felt his side’s display proved something of a microcosm of their season, Alex waxed lyrical about the performance of Daniel Johnson both at Ashton Gate and throughout 2019/20, after the playmaker picked up the club’s Player of the Year and Players’ Player of the Year trophies earlier in the week.

“We said this before these games kicked off, in the fact that everyone’s going to have to play their part. It was nice today as well to get young Tom Bayliss on the pitch.

“I thought he showed some nice touches when he was on so that’s good, I thought Jordan Storey was excellent tonight, but if I’m being honest I thought there was one outstanding player on the pitch – I thought he was the best player by a mile – Daniel Johnson

“I thought he was sensational and that sums his season up. We as a team probably needed to take some of the load off of him in terms of what he’s done this year.

“He’s been incredible this season. In terms of figures, I’d like to see his running stats for tonight as well, the amount of ground he covers is incredible, but goals, assists, quality – he’s just a quality player.”

Click the video above to watch the manager's full interview.