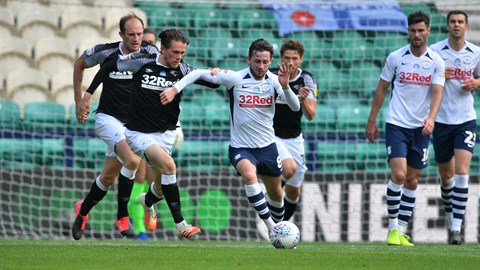 It was a quiet afternoon for the most part for the North End custodian as that moment of quality from the Rams skipper after 18 minutes left the home side chasing the game from that point onwards, and despite Alex Neil’s side sustained pressure, they couldn’t find an equaliser.

Speaking to iFollow PNE after the milestone fixture, the Lilywhites’ No.1 admitted that he and his team-mates are doing their utmost pick up a first win following the season’s resumption, sharing the frustration as the visitors left with the points.

“We’re giving it everything to try and make that breakthrough but it’s just not coming together at the minute,” he said.

“We’re getting punished at our end and just not having the breaks their end, it’s very frustrating because as you can see everyone’s trying their absolute heart out and everyone’s giving it everything. It’s just unfortunate at the minute that it’s just not good enough.

“It was a game being played in the middle third and their third. We just couldn’t create that clear-cut chance to get the goal. They sit off and sit in front and make it really hard to play through, they’ll let you have it at the back and we had to change the way we went about it and miss them out and go longer. We don’t enjoy playing that way but sometimes that’s what you’ve got to do.

“Maybe if we had another five minutes out there we might have been able to get something but we had 96 minutes, maybe more, and we just couldn’t do it. It’s disappointed, we’re all disappointed, but I said before this we started back, the first three games have gone, that doesn’t mean it’s over.

“There’s still time, everyone seems to be stumbling, if you want, at the minute and we need to just pull ourselves out of this and get back to what we do best. I’m sure once we get that win, the confidence will be back and the rest will come together.”

The 29-year-old felt his side were hard done by for the decision to award Derby a free-kick that ultimately led to the match-winning goal.

“I think the referee forgot that he could actually give us a decision, but there you go, you have to deal with that, there’s nothing you can do.

“When you’ve got someone like Wayne Rooney standing over a free-kick, I can possibly look at myself, maybe got caught in no man’s land a little bit, but you just try to do what you can and with that quality sometimes, it’s just sort of hold your hands up.”

With the Lilywhites missing out so narrowly, Rudd stressed his belief that, if the squad can maintain their work rate and efforts in their remaining six games of the season, they can be confident of their fortunes turning for the better.

“That’s one thing with this group that you always get – you never get a performance where the lads haven’t given everything,” he continued.

“We were undone by a bit of class and if you won the game on effort, I think we would have won it, but unfortunately it’s all about the scoreline and we just couldn’t get that today.

“We do make sure we go out there to win every battle on the pitch and try to outrun teams, try to outwork teams and I thought we done that today.”