Preston North End manager Alex Neil admits that Deepdale without the supporters this weekend will be another new experience for his team to deal with.

Despite the resumption of the Championship coming a week ago at an empty Kenilworth Road, against Luton Town, the PNE boss feels that playing at home will be something else the team have to deal with, especially without the support from the terraces.

He said: “It will be different at home; that will be a new experience for us again. When you are at home, fans get behind you and we are very much a momentum-based team and a lot of that momentum is generated by the fans

“If we are doing well, very are very vocal and the lads spur on from that.

“It is that sort of x factor you need that gives your side that edge and when we have that edge, we perform at our best.” 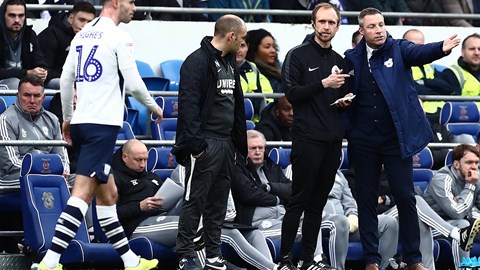 Cardiff started again in positive fashion, the Bluebirds beating automatic promotion chasers Leeds United at the Cardiff City Stadium in front of the Sky cameras last weekend, but after three months away, did the manager learn anything new about the club’s first home opponents?

“I didn’t learn anything new. I think they looked fit, they worked extremely hard, they were pragmatic in the way they played, I think they understood what Leeds’ strengths were going to be and Neil set them up to give them the best chance of winning that game,” he continued.

“Leeds are a good side, as we all know, and are very difficult to beat and Cardiff performed very well in the way they wanted the game to go.”

That win put the visitors for the club’s 4,999th league game on the same points, just behind the Lilywhites on goal difference, but the manager feels it has been tight at the top for some time.

“It has been really tight for about the last five or six matches. Every weekend we were going into a game knowing how many teams are behind us and that everyone was playing each other, but that just shows you how tight the Championship is.

“The games are very different to what you are used to, but it is the same for every team and we need to crack on and do the best we can in the situation.

“It is a funny stage of the season. When there are eight to ten games left, the teams who have really struggled to win games since the start of the season, seem to kick in and start to put runs together to stay in the league. I don’t know if it is nervousness for the top teams, because they are so close to that end point or the bottom teams focusing and concentrating more, but it happens most seasons in every division.

“I wouldn’t say [playing behind closed doors] is a leveller, I would just say that some teams are more suited to this environment than they would have been otherwise. It is difficult to say who; the biggest thing we have found difficult is the tempo of the matches.

“It is extremely warm and naturally it starts to take the sting out of the game, as it does with no fans or atmosphere, which makes it difficult to create that tempo.

“Teams who are happy to sit in, have no fans urging them to get up to the ball and be more expansive; teams are more comfortable sitting in their shape and if you look at Cardiff’s last game, they did that to great effect against Leeds, who found it extremely difficult to break it down, who became more expansive, naturally leaving more gaps at the back and Cardiff – with real quality – exploited that,” he added.

There’s load more from the manager’s extended preview to the game if you click on the video at the top of the page, with the gaffer speaking to iFollow PNE about the challenges of the eight games in the next 25 days – watch it for free above.