Alex Neil admitted it was ‘gutting’ not to see his side take all three points on their return to Championship action at Kenilworth Road, with Callum McManaman’s 87th-minute equaliser snatching a point for hosts Luton Town. 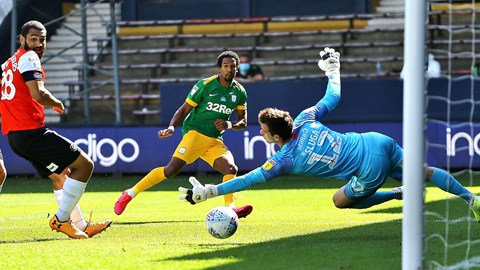 The Lilywhites were the dominant side for much of the contest and looked to have made that count when Scott Sinclair curled low into the corner to put the visitors deservedly ahead.

Speaking to iFollow PNE after the game, though, Alex felt it was just one lapse of concentration that blemished North End’s performance and ultimately prevented them from recording a victory.

“They played well, they dominated the ball,” Alex said of his players. “I’d like it if we created a few more clear-cut chances, I don’t think we had enough of them – but we certainly did enough to win the game.

“We were really, really comfortable in the match. I don’t think they posed too many problems and we had one lapse of concentration and it’s cost us a couple of points. The lads are devastated, everybody’s gutted because we did enough to win but didn’t get it across the line.

“The biggest worry for me was getting the first goal, any team that sits in and makes it difficult, let’s you have the ball, you need to have your quality to break them down.

“We had moments and the obviously the goal was a great moment for us and once we got that, I thought, ‘This is going to suit us now because they’re going to come out, they’re going to leave the space and we can try to exploit that space.’

“And we did, we got down the sides quite a few times and got into good areas and then one transition, we actually do great to recover from – Tommy B [Barkhuizen] busts his self to get back in – and then we just give it away a little bit cheaply and then from that point, we just don’t defend a shot from the edge of our box well enough and it’s cost us the points.”

Alex underlined his view that, from his first experience of playing behind-closed-doors in the Championship this afternoon, the remaining nine games will not be the same as those earlier in the campaign and that the absence of supporters did, indeed, make a difference.

“Anybody saying these games are anything like the real stuff, in my opinion, is wrong, and that’s me only sampling it the first time here today, because it was really eerie, there was nobody here, you can hear every groan, anything on the pitch you can hear it.

“I think what happens is the tempo naturally suffers because I think the adrenaline the players get if you walk out and there’s a crowd and people are singing and shouting and all the rest of it, urging them on, none of that’s there and it really is quite strange. But it is what it is for the next however many games we’ve got.

“We need to adapt, I think what you need is try to build tempo into the game through your players, with how quickly they move the ball, how quickly they get after the ball, and most of our facets of our game I thought were good today.

“We limited them to very, very little, we moved the ball really well at times. Maybe more chances [could have been] created at the other end but we’ve done enough and one shot that’s not defended has cost us.”

The manager had no major concerns with side’s display but felt they should have held on to claim the three points.

“That’s not an excuse [not having fans] because we should have seen the game out. Normally when we take the lead, that’s a great position for us to be in because it allows us to then hit on the transition and defensively normally we’re really solid.

“I didn’t think there was any fundamental problems in the game whatsoever today, in terms of the way we played, how we set-up, we had one lapse of concentration and it is gutting, it really is gutting, because at this level we expect ourselves to see that out.”

Watch more from the gaffer now on iFollow PNE.